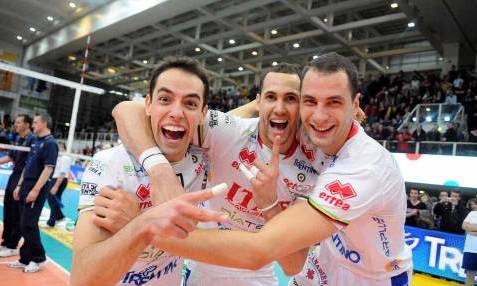 Osmany Juantorena and Matey Kaziyski in Serie A? This sentence sounds oddly but perhaps truly. Volleyball journalists in Italy got hold of extremely interesting and vital news about last summer’s transfers processes in Tretino Volley presenting what happened in corridors.

When a players-and-coaching quintet ,Omany Juantorena, Matey Kaziyski, Raphael Vieira de Oliveria, Mitar Djuric, and Radostin Stoychev, was leaving Trentino Volley to reinforce Halkbank Ankara on its way to successes, probably no one did not even assume their adventure with the financial magnate will not be so long.

Italian medias reported that the all four, that arrived to Ankara as the first tranche (Juantorena, Raphael, Kaziyski and Stoychev) were not transferred to Turkey permanently but they were given there just for an one year loan and would like to take advantage the contracts conditions to come back on the Apennine Peninsula.

There appeared some opinions annunciating that the returns of the Cuban receiver and Brazilian setter to Diatec Trentino are almost overdone, in particular that the team of Dolomites may find a new and pretty rich sponsor.

The feat of Juantorena and Raphael will not rather be shared by two remaining members of the former Trentino. Radostin Stoychev is not on the same wave length with his ex employers so he may get a new job in Calzedonia Verona, where Matey Kaziyski would be welcome too.

Other teams of the Serie A try to forget about completely unsuccessful season in European Cups and already think about the future. Copra Piacenza, first of all, is going to focus on the actual line-up maintenance since Casa Modena wants to steal leaders of Piacenza. Luciano De Cecco, Robertlandy Simon and Luca Vettori, supported by Ervin Ngapeth, could ensure domination in Italy.

Lube Banca Macerata has already casted a net on one of the best libero of the young generation, Jenia Grebennikov, however, the Frenchmen is probably going to make up his mind to stay in VFB Friedrichshafen.