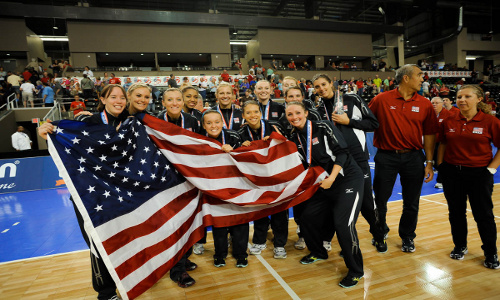 Yesterday ended championship for NORCECA zone – North America and Caribbean. American team had almost no tougher opponents. Only one team, which stole USA a set, was their final rival – Dominican Republic.

Play Off Round Results:

All tournament was quite easy to predict. As I expected the best team: USA and Dominicana met each other in final battle. Quite nice background for these two were Puerto Rico with almost the best roster (only missing was setter Vilmarie Mojica) and Canada. The biggest disappointment was Cuba, without 3 escapers from this year: setters Ana Cleger and Lilianny Marcillan and wing spiker Yoana Palacio, team took only 7th place. With these 3 they could fight for a medal, in Pan-Am Cup Cuban team lost vs. Puerto Rico after tiebreak.

USA winning NORCECA Continental Championships secured place in World Grand Champions Cup, in November in Japan. Their ooponents there will be Japan (host), Russia (European Champion), Brazil (South American Champion, tournament is still running), Thailand (Asian Champion) and team with Wild Card (most likely it will be Germany or Korea, we should wait for FIVB decision).