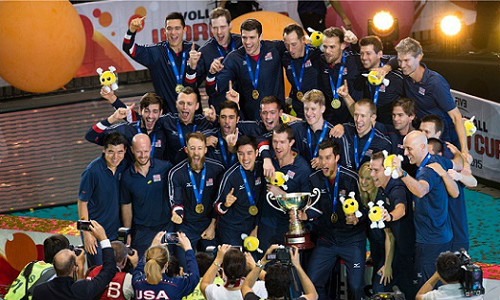 Tokyo, Japan, September 23, 2015 – USA booked their ticket to the Rio 2016 Olympic Games by claiming a first FIVB Volleyball World Cup in 30 years, with silver medallists Italy joining them as the 2015 edition drew to a dramatic end in Tokyo on Wednesday.

The two countries will join Brazil at the Rio Olympics next year after claiming victories on the final day, but it was devastation for Poland who missed out on a berth in their last match of the tournament. Their loss to Italy saw them fall to third place on set ratio.

USA sealed the crown – their first since 1985 – with a 3-1 (25-20, 25-21, 17-25, 25-20) win over Argentina. The United States’ attacking game was on song, despite gifting the third set to their South American rivals thanks to a number of errors. Maxwell Holt won the most impressive player award with an 18-point haul and he had the honour of spiking home championship point. Facundo Conte topped all scorers with 22 points.

Italy stunned unbeaten Poland 3-1 (26-24, 22-25, 25-22, 25-19) to be the first team to claim their Rio 2016 ticket earlier in the day. Osmany Juantorena was talismanic in attack, scoring 25 points as the world No.4 dealt the world champions a hammer blow. Coach Gian Lorenzo Blengini said the “one reason for the victory today was spirit.”

A tournament record 17 blocks as well as a solid offensive display saw Russia narrowly edge Japan in five thrilling sets (27-29, 25-17, 21-25, 25-17, 15-13). The hosts put on a defensive clinic, throwing everything at the Olympic champions, but finished the match on the wrong side of the scoreline, despite some passionate support from the wonderful home fans.

Iran ended their tournament on a high, dismantling Egypt in three sets (25-18, 25-11, 25-23). Seyed Mohammad Mousavi Eraghi was the magic man for Iran and he led from the middle with 12 points to emerge as the Most Impressive Player.

It was a happy end for Canada as they finished their campaign in Japan with a 3-0 (25-19, 25-21, 25-17) victory over winless Tunisia. John Gordon Perrin led the way with 14 points, but it was Nicholas Hoag who won the most impressive player with 13 important scores to wrap up the Canadian win.

Australia capped off their run in the tournament by taking a 3-1 (25-16, 25-21, 22-25, 25-21) victory over Venezuela in the final match at the Tokyo Metropolitan Gymnasium. Paul Carroll put on a consistent performance to claim 25 points and the most impressive player award while Max Staples took 12 markers as coach Roberto Santilli’s squad left Japan on a positive note. 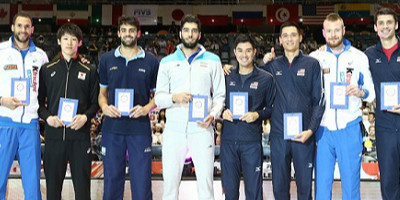 The United States’ Matthew Anderson is the Dream Team frontrunner as he received the Most Valuable Player (MVP) award of the FIVB Volleyball Men’s World Cup Japan 2015 on Wednesday.