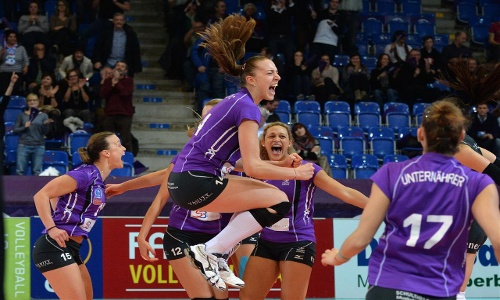 Champions League is back after longer break. Now matches are much more exciting because of higher level of each team. We have some surprises and one of these was in Zurich, where Volero was better than Rebecchi Piacenza.

Omichka playing as visitor couldn’t find solution for good spiking Bulgarian Opposite, Emiliya Nikolova. Omichka had chance to be more competitive, but they lost it commiting too much errors in each set – overall 40 errors! Still underperforms Azeri Outside Hitter Natalya Mammadova, who should be bigger support for her team, especially in terms of spiking, has been playing so ordinary lately. She’s often covered in reception by Yuliya Kutyukova and Viktoria Kuzyakina, so she should have more power for her so so spikes throughout last matches. I don’t get it why Mammadova is still calling as one of best Outside Hitters from last year, because she wasn’t. Although Omsk had better reception than Prosecco, Maria Babeshina used middles too rarely and result found place in good blocking by Conegliano. Queen of the net was Berit Kauffeldt, next good German Middle Blocker who can replace Corina Suschke-Voigt in NT, because she’s considering maternity break.

It’s not a surprise why Eczacibasi won this game. Neslihan Demir is still high level spiker, though more and more spectators are criticising her. Last set was saved by Chinese Wing-Spiker Yimei Wang, who plays not often because of communication problems. This time club’s management because of killing game throughout last actions named Wang as club’s precious! Atom still has problems with an Opposite and it’s obvious that neither Anna Podolec, nor Judith Pietersen plays on satisfactory level.

Great game by Cannes, but ended with serious tendon injury by Maret Grothues, which is out for at least 4 months. Leading spiker was Nadia Centoni and got visible support from Middles: Freya Aelbrecht and Milena Rasic. At Galatasaray’s side key missing player is Madelaynne Montano who has serious health problems and because of this won’t play till the end of season. Neriman Ozsoy is replacing Montano well, but weak position was left wing, especially when Dobriana Rabadzhieva appeared there.

VakifBank weas overall better, but helped Azeri team a bit, giving them too many points after mistakes. Because of finger injury absent was Opposite Jovana Brakocevic, but her back-up Polen Uslupehlivan didn’t play bad at all. Leader thanks to killing block efficiency was German Middle, Christiane Fuerst. Iqtisadchi is suffering from collapsing performance again. It has also “second bottom” because of annoying club’s director who’s interfering too much and fires too many players. Only Thai players don’t have bigger problems here, but complained inter alia Qiuyue Wei (she has already left club and is back in China) or Manon Flier (she’s still here, but doesn’t like atmosphere in team). Another player who left club is Kim Willoughby.

Difference in that match made especially Ekaterina Gamova and Kazan’s Middles, especially Regina Moroz with 6 blocks! Natalya Obmochaeva had too weak efficiency, while Moscow’s Middles were like a shadows. Even new transferred to Moscow Russian NT Libero, Anna Malova from Ufimochka Ufa didn’t help too much. As a result of this game Svetlana Ilic is no longer a head coach of Moscow’s team and is replaced for a while by Leonid Zayko, I don’t know if it’s temporary replacement or a permament one.

Volero was better in almost all elements, not including blocks. Olessya Rykhliuk with Kenia Carcaces scored many times, while Rebecchi’s wings were undercut and also team’s reception hobbled. Disappointment were both Lucia Bosetti and Lise Van Hecke, also Floortje Meijners didn’t show anything special. Only Middle Blockers again played at decent level at which should have played rest of team also this time. Fortunately team is unpredictable and their play should look better next time. Meanwhile appeared a rumour that head coach Giovanni Caprara is serious candidate for Italy’s NT coach.

Return matches will be played in next week, winners will play in next round according to key: