WCL Pool A: Rabita better than Omichka in tiebreak thriller! 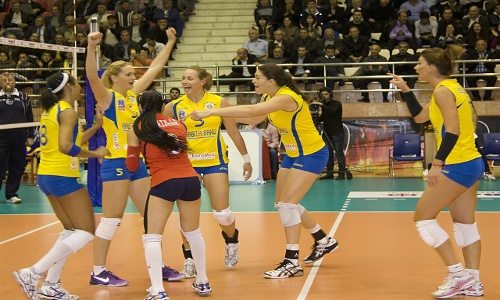 In Baku hall spectators can watch extraordinary battle between Rabita and Omichka Omsk. Better is team from Azerbaijan. In second game in this pool Dresdner SC beats Beziers in four sets.

Katarzyna Skowrońska-Dolata and libero Brenda Castillo were the players who stood out for Rabita Baku while Australian Rachel Rourke also contributed to the final result especially with her jump serves. Puerto Rican wing-spiker Aurea Cruz, on the other hand, helped Rabita with a very solid performance at the net as well as in defense. As for Omichka, the “Cats” as they are nicknamed in Russia were anchored by Natalya Mammadova and Cuban Nancy Carrillo.
Rabita block was good enough to stop Omichka spikers in the tie-break and take a much desired victory that was claimed before almost 2,000 fans.

“It was our first game in this competition and I have to say that my team showed quite a good performance tonight” said Rabita head coach Angiolino Frigoni. “The score could have been a little different but a victory remains a victory and the Russian team performed really strong”.

“I am very happy; the first victory in any competition always has a special and very sweet taste” commented Rabita team captain Sanja Starovic. “I am sure we will be able to improve on what we did tonight as we progress through the season”.


“It was a very tough game and it did take a lot of energy from us all” said Omichka superstar Natalya Mammadova.

Unfortunately stats from this match are still not available, that’s also reason why I mentioned only starting line-ups and no scores by each player.

“It was such a pleasure to play in front of such an emotional crowd today. We had some problems at the beginning of the game because my team was really nervous. But starting from the second set we did a great job in block and defense”, said Alexander Waibl, the head coach of Dresdner SC. Lisa Izquierdo scored 26 points in the game followed by Hélène Schleck who registered 16 for the losing side from France.

The hosts of Dresdner SC had a very nervous start in the first set of their season’s opener. Their French opponent performed well in reception and scored frequently in attack. The Germans had some difficulties to get into the game, but when the score stood at 14:17 they were finally trailing by just three points. Nevertheless, Beziers Volley was able to control the game and although Dresdner SC survived to five set balls for their opponents, a serving error by German setter Mareen Apitz sealed the final 25-22 for the guests.

The second set seemed to be an easy task for the home team, but just like Dresdner SC had fought back in the first set, Beziers tried to do the same in the second. The hosts went up 20:14, but the French team was just three points back when the score was 23:20. The well performing youngster Lisa Izquierdo scored the point that ended the second set (25-22).

The third set was dominated by Dresdner SC. They did a great job in attack, defense and serve and it was again Izquierdo who scored the important points for the home team. Apitz finished the set with a setter dump (25-18).

The fourth and final set was a hard fight. Both teams battled head to head until 13:13. But it was Beziers who took the lead first with a small break to run away at 17:14. Drsedner SC never gave up fighting and was determined to take three points from this game. Katharina Schwabe blocked an attack by Ludmilla Da Silva and cashed the first opportunity for her side to win the game 3:1 (25-21).