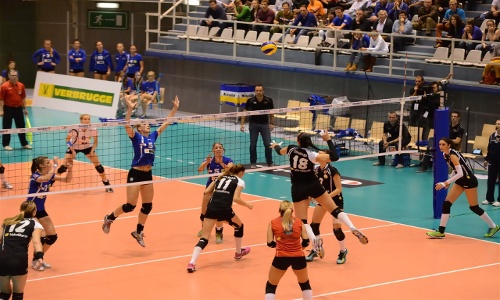 VakifBank head coach Giovanni Guidetti changed some of the players from his starting six as his side did not show their usually superb play in the second and third set. His wife Bahar Toksoy top scored in the end with 12 points while Karolien Verstrepen paced the home side with 11. Marlies De Smet suffered an injury during the second set but even without her Gent Dames played very well in attack.

VakifBank opened strong (4:1) with an ace of their captain Gözde Sonsirma Kirdar but Verstrepen was able to almost close the gap (11:9). De Smet scored twice in a row to reduce the gap to the slimmest margin (13:12) but VakifBank got back on track and showed great blocking to win  the opening set 25-15.
After De Smet got injured by the score of 7 all in the second set, the home team was still able to react and went to the front (12:8). VakifBank got back on track helped by Polen Uslupehlivan and Jelena Nikolic, and then they controlled also the final section of the set with Bahar Toksoy scoring three times in a row to seal the final 25-21.
Karolina Goliat and Laura De Schrijver helped the home side set the pace of the game (8:4) at the first technical time-out of the third set but after drawing level at 16, VakifBank did not look back anymore and wrapped it up in straight sets.

“Tonight we got to see a very interesting game” said VakifBank mentor Guidetti. “Gent Dames showed some fast Volleyball and they were able to cause us problems in many circumstances. We had to concentrate fully on the game to win, as we normally play better than we did tonight”. Gözde Sonsirma Kirdar congratulated Gent Dames on their performance and the resistance they showed as they took on the reigning world champions.

“Of course we miss power but we were able to control Jovana Brakocevic and Kirdar who never really got into the game” said home mentor Stijn Morand. “We did what we could against this star-studded team and I am satisfied”. “If I see the way we played tonight, I think we deserved to win at least one set” concluded Gent Dames most prolific player Karolien Verstrepen.

Atom Trefl was able to come back strong after losing the opening set to the hosts of Dinamo Romprest with Anna Podolec top scoring in the end with a massive tally of 24 points, including 5 blocks. Two more players of Atom Trefl finished the game in double digits – namely Zuzanna Efimienko with 14 and Charlotte Leys with 11. Dinamo Romprest most prolific player was Mariya Karakasheva who chipped in with 14 while Diana-Dora Carbuneanu registered 12.

The match was also a duel of coaches as 25 years ago they had played each other, with Marian Constantin representing Steaua Bucharest and Teun Buijs playing for Martinus Amstelveen.

The first set was a very close affair until 12 all with both teams showing very good Volleyball in all fundamentals. Dinamo Romprest took a little advantage at second technical time-out (16:14) and also after that stop the hosts played more constantly. Diana Nenova showed good command of the game and put Mirela Corjeutanu, Ioana Baciu and Mariya Karakasheva in the right condition to score thereby paving the way for the final 25-20.

However, Atom Trefl did not surrender that easily and after a good start took the lead and dominated the scene in the second set (5-8) with some great play in block and defense. The Romanian coach had used all of his time-outs already halfway through the set, and as Charlotte Leys was pressuring Dinamo defense line with her serve, Atom Trefl claimed a margin of six points (10:16). Dinamo tried to fight back but was not rewarded for their efforts; 17-25 was the final score in the second set.

With the provisional 1:1 on the scoreboard, the teams practically re-started the match in set 3 and the game was really close and tight, 7:8 for Atom Trefl Sopot at the first technical time-out. After that Atom improved their block and hit from various positions – side, diagonal as well as via their middle blockers, and the score was 13:16. The head coach of Dinamo, Marian Constantin, made a change to his usual starting six giving some playing time to his second setter Daniela Minca but the Polish blocks looked like a kind of wall and Atom Trefl won the third set (17-25).

The fourth set was quite balanced at the beginning up to 12 all; after Sopot drew level at 14, the Romanian coach asked for a time-out but the hosts could no longer find a way through the Polish block. Sopot moved the score up to 18-22 before pocketing the final rush of the game at 23-25 after Dinamo saved 3 match points.

Marian Stefan, manager of Dinamo said: “We started good but unfortunately they played better and better and we didn’t find the right answer for that.”

Teun Buijs, head coach of Atom, added: “I am really satisfied with my team’s performance, also Dinamo is a strong team and I believe they can win some matches in our group.”