WCL Pool D: Cannes and Eczacibasi give no mercy! 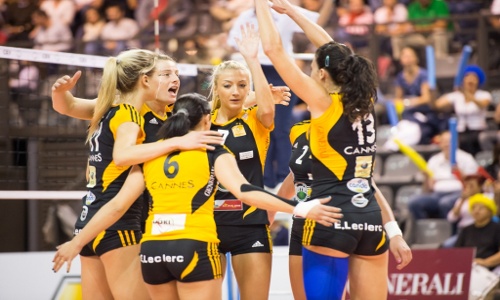 Games in France and Turkey were shows of strength. Both Cannes and Eczacibasi samashed opponents: Agel Prostejov and Schweriner SC with 3-0. It’s obvious that these two should fight for prism in this this pool.

Racing Cannes set the tone of the game right from the start (4:0) and continued the same way through the opening set; Schweriner SC head coach Felix Koslowski asked for a time-out as his side was trailing 6:10 and 7:14 but he could not stop the terrific run by RC Cannes that was 16:8 up by the second technical time-out and then cruised to a comfortable 25:17 set win.

The score was close in the early phases of the second set with ties at 5 and 7; RC Cannes changed gear after the first technical time-out as they moved the score from 8:7 to 13:9 prompting another time-out by Koslowski. It did not change much as RC Cannes scored four consecutive points after the second mandatory stop also exploiting the many mistakes made by their opponents to pocket the final 25:15.

RC Cannes dictated the tempo of the match also in the third set going up 8:4 and 16:10; their guests from Germany were never able to fight back and find their way into the game and Cannes finished it off at 25:16 for a speedy straight-set victory.

Tatjana Bokan and Nadia Centoni top scored for Cannes in their winning effort with 14 and 12 points respectively while team captain Lousi Souza Ziegler and Saskia Hippe got 8 and 11 points.

The home side caught a flying start with Neslihan Demir (Darnel) serving strong (6:2) to force Czech mentor Miroslav Cada into an early time-out. Agel was still trailing 3:10 as Cada replaced his diagonal with Lucia Ruzickova and Katie Carter substituting starting setter and opposite Pavla Vincourova and Solange Soares. Cada stopped the game once more as Eczacibasi was setting the pace at 11:3 and could get some kind of a reaction as Prostejov scored three points in a row and could reduce the gap shortly before the second mandatory stop (15:9). However, the hosts were well determined to keep control of the operations and they cashed the first set at 25-15 with Neslihan Demir registering six points – including three aces – while Andrea Kossanyiova had six as well for the guests from the Czech Republic.

Agel caught the better start in the second set (2:4) but Demir turned the score around with some strong serving (6:4). Eczacibasi was up 8:5 at the first technical time-out and Cada stopped the game for the second time as the Turks had widened their lead up to five points (12:7). This could not prevent Eczacibasi from going for a comfortable 25-14 with Demir adding another seven points to her personal tally.

Similarly to what they had done in the second set, the Czechs stormed out to a 4:2 lead also in the third before Eczacibasi clawed back to level at 5. The hosts dictated the tempo of the game (8:6) but three consecutive points by their opponents flipped the tables around (8:9). Eczacibasi was able to respond playing with good intensity (13:11, 16:15) but this time the Czechs were not ready to give in that easily (17:18). The score was leveled once more at 19 all, a block killed by Maja Poljak made it 22:20 for Eczacibasi and it was – quite deservedly – Neslihan Demir who finished it off for a 3:0 victory (25-21). Demir registered 15 points in the end with Poljak adding another 13 for Eczacibasi while Kossanyiova was the most prolific player for the guests with 9.

“It was a good start for us in this competition but it is too early to make any predictions. We have a long way to go before we can reach the final four” commented Eczacibasi head coach Lorenzo Micelli.

“We had a very good preparation phase this year and you can see that we already play at a very good level” added team captain Esra Gümüs Kirici. “Next week we travel to Germany and it won’t be an easy game there with Schweriner SC. We first have a match for the national league and afterwards we will get ready for that game”.