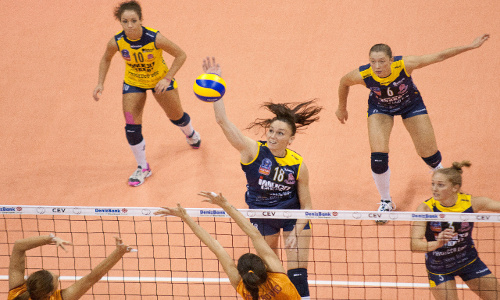 Huge emotions are in Pool E, both matches end aftertiebreak. Winners are hosts: imoco Conegliano and Azeryol Baku. From this pool each team have changes for play in Play Offs.

The match was played at the Palaverde, a familiar venue in Europe for it used to play host to the home matches of former Italian standout Sisley Treviso. The hosts started out strong and with their team captain Valentina Fiorin impressing with her consistency and charisma they won a close first set (25-23). With more than 3,000 fans in attendance for the debut of the so-called “Panthers”, Conegliano imposed their pace also in the second set with Marta Bechis and Cristina Barcellini replacing Carli Lloyd and Valentina Tirozzi in the starting six. After trailing 11:16 halfway through the set, with the addition of these players Imoco fired back to claim the second set with another 25-23 and a block by their veteran player Jenny Barazza.

The third set fully belonged to the guests from Turkey with Madelaynne Montano and Stefana Veljkovic paving the way for the final 25-19 for Galatasaray. The Turks caught a flying start also in the fourth set (7:1) and even though Conegliano was able to claw back, still it could not compensate for that slow start and Galatasaray called for the tie-break (25-21).

The fifth set was a dramatic battle where Galatasaray initially went up 9:5 with excellent serving by their Colombian superstar, Madelaynne Montano. However, Imoco fought back to draw level at 12 all and then survived to three match balls for their opponents before Barazza got the party started with a block that sealed the final 18-16 and 3-2 victory.

“Conegliano played much better than we did and we started playing the right way too late. We are still not ready for that kind of matches and you simply can’t accept a defeat which comes after you have been leading 12:8 in the tie-break. However, my congratulations go out to our opponents” said Galatasaray Daikin head coach Massimo Barbolini.

“This is a great victory especially as we showed that we did not want to give up after Galatasaray had started playing really strong” commented home mentor Marco Gaspari. “We showed a great attitude and character as we fought back from 8:12 in the tie-break. This is a great result”.

The match started quite well for the guests from Italy as they were helped by the many errors made by Azeryol spikers. Unendo Yamamay had the slimmest margin by the time the first technical time-out was called (7:8) but with their home heroine Polina Rahimova hitting hard and some great actions of their libero Valeriya Korotenko, Azeryol fought their way back (16:13); the head coach of Unendo Yamamay Carlo Parisi stopped the game after Azeryol had drawn level at 24 all and his players responded well pocketing the two next rallies to go for the 0:1 (24-26).

Unendo Yamamay set the pace of the game also in the early phases of the second set (7:8) but Azeryol head coach Angelo Vercesi finally found a way to stabilize the reception and offense of his side. Azeryol played with more and more confidence (16:14) and cruised to the final 25-20 to draw level in sets.

The home fans were happy with the terrific start of their heroines in set 3 (8:4) with Polina Rahimova and Chiara Di Iulio anchoring Azeryol attack and blocking. Azeryol had a comfortable lead (16:9) halfway through the set and even though Parisi substituted some of his starting players, he could not prevent Azeryol from cruising straight to the final 25-15.

Things changed in the fourth set where Unendo Yamamay got off the blocks with a very good pace (2:5, 5:8) and by the second mandatory stop their lead had increased up to nine points (7:16). Though Azeryol attempted a late comeback (12:16), they could not compensate for their bad start and the set went to Unendo Yamamay (17-25).

It was a make-or-break mission for both teams in the tie-break. Azeryol was leading 8:6 as they changed sides of the court and even though Unendo Yamamay tried up to the very end to upset the home side, Azeryol could cash the final 15-13 and two points from this victory.