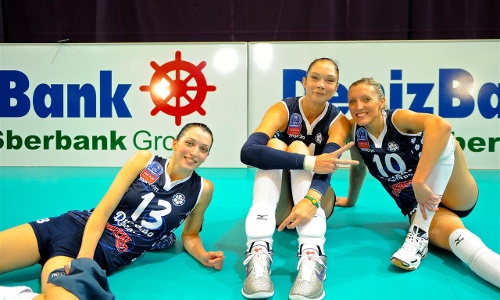 After their fourth place at the 2013 FIVB Women’s Club World Championship the Swiss champion wanted to prove their shape and get a victory in the opening game of Pool F. However, there was a strong opponent waiting with Dinamo Kazan. The Russians had a winning streak of seven games so far this year and declared the first place in the 2014 CEV DenizBank Volleyball Champions League as their main goal for the season.

Volero started well in the first set. The Swiss host fought hard and got an early 4-1 lead against the favorites. This deficit woke up the Russian champion. Rishat Gilyazutdinov’s players stabilized their offensive play and easily broke through the Swiss defense. Dinamo won six consecutive points as a consequence and forced the turnover. Kazan put a lot of pressure on their opponents by well-placed and hard smashes. The time-out by Volero head coach Jan Lindenmair at the deficit of 8:13 only showed a short effect. The Swiss struggled in offence and lost the first set 18-25.

The pre-favorite Russians started better in the second set and took an early lead. Volero fought their way back into the game. However, after a short lead by 6-5 the Russian opponents increased the pace and scored eleven consecutive kills. Dinamo was coolheaded and seized the inefficient blocking game of their opponent. Volero coach Jan Lindenmair tried to wake up his players by taking two time-outs, but it didn’t work. The Russian champions were the dominant team and won the second set clearly by 25-12.

The very beginning of the third set was tight. Nevertheless, the Russians proved again their skills and lived up to their reputation. They got kills by a well-timed offensive game and showed good actions in reception. This dominance nevertheless got lost suddenly. Rishat Gilyazutdinov’s players seemed to rest on their laurels at the comfortable lead of 18-9. The host team revolted against the imminent defeat by fighting their way back into the game and could shorten the deficit to 13-19. Dinamo head coach was forced to take two time-outs as his players struggled to find their game again. The Russian champion could nevertheless get back momentum moving up 20:15 and finished it off at 25-18 for a well-deserved 3:0 victory.

Dinamo Kazan coach Rishat Gilyazutdinov: “We showed our willingness in the first set, but had some problems in the third. There was a lack of concentration in the third set and our reception wasn’t as good as it should be. Nevertheless, we certainly can be satisfied with our attitude and with the result.”

Dinamo Kazan opposite Ekaterina Gamova commented: “We struggled a little bit with the time difference. We played at a time when it’s already night at our place. We slept in the third set. I think the time was the reason why we had these problems. We want to work hard now for the next games.”

Volero head coach Jan Lindenmair said: “There were some positive points. However, we lost and committed too many unforced errors so I can’t be satisfied with our performance today. Dinamo Kazan certainly is a strong team, but we were too passive with our offensive play. We want to improve ourselves for the next game, even if there’s not a lot of time.”

Volero captain Nneka Obiamaka Onyejekwe: “Dinamo Kazan played very well today. As they are together as a team for a long time and had almost a perfect reception today we had big problems. The fault is ours as we committed too many unforced errors. We have to improve ourselves for the next game and show more spirit.”

The first set was very close as both teams were displaying good Volleyball but shortly before the second technical time-out Tauron MKS killed a few spikes to break away in the score and get a margin of four points. The last section of that set was fully controlled by Tauron MKS that could seal the final 25-21.

“The start of the match was good for us; we played really good but after that we could not control our emotions and this resulted into a poor performance in the second and third set” said after the game Stiinta Bacau team captain Denisa Rogojinaru. Stiinta only had a few moments where it played good and Tauron MKS easily dominated the scene in the second set (25-15). “This match was very important for us because recently we had not played that good. And frankly speaking, Stiinta did not play that strong tonight” said Tauron MKS team captain Elżbieta Skowrońska.

The game marked the debut of Stiinta Bacau in Europe’s elite club competition. “We have very limited experience at this level and this combined with a poor performance resulted into a straight defeat for us tonight” said Stiinta head coach Florin Grapa. “We are rookies and tonight we did not start that well in the competition but I just hope that in the next matches we will be able to play much better than we did here in Poland” he concluded.