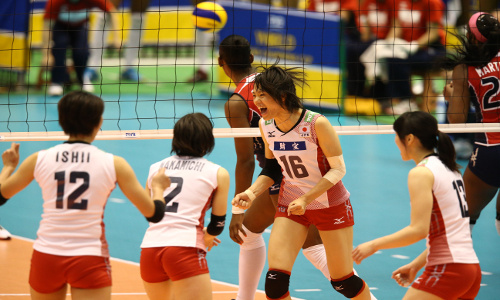 Brazil and Japan have already medals and tomorrow will fight for a win. They beat Russia and Dominican Republic. The biggest emotions were in match Thailand-USA, we have tiebrek there, which Americans won.

The win saw the Americans raise their record to 3-1 for seven points, while Thailand dropped to 0-4 but picked up their first point in the tournament.Thailand’s Onuma Sittirak was the top scorer in the match with 28 points, while Jordan Larson-Burbach led USA with 23. USA middle blockers Lauren Paolini and Cursty Jackson contributed 16 and 15 points, respectively, in the victory. Thailand’s Wilavan Apinyapong and Pleumjit Thinkaow each scored 14 points in the losing cause. USA earned 11 blocking points, while the Thais had nine. Both teams had three service points. The Americans committed 26 errors to Thailand’s 18. The Americans improved to 15-1 their lifetime record against Thailand in official FIVB competitions.
Going into the match, Thailand had only beaten USA once against 14 defeats in FIVB tournaments but it looked as if they would have a good chance of collecting their second win after a blistering performance in the first set. With two of the Americans’ first three points coming from blocks, it seemed that the Thais might struggle against their taller opponents. But the first timeout of the match came from USA coach Karch Kiraly – after Sittirak picked up her second block of the set, equalling Thailand’s blocking output from the previous day against Japan. When the Americans fell 14-10 behind after some sloppy play, Kiraly called his team off court again, but things didn’t get much better for USA. Pleumjit Thinkaow and Wilavan Apinyapong provided two more blocks for the Thais and Sittirak laid down two terrific thunderbolts as Thailand moved into an 11-point lead at 23-12. Malika Kanthong’s half-hit spike brought up setpoint and Sittirak put the Thais 1-0 up with another rocket through the American defence.
Things were closer in the first phase of the second set and the Americans started to find holes in the Thai defence, which Larson-Burbach and Lauren Paolini were happy to exploit. The Thais were two points ahead at the first technical timeout but the Americans turned the pressure up in the second phase with Cursty Jackson delivering a couple of telling blows, helping her team to a three-point advantage at the second TTO. But three dropped points later, Kiraly called a timeout. The Americans moved back into the lead and Thailand called a timeout at 20-18, but after another good block by Thinkaow that levelled the scores at 22, Kiraly called his players off court again. The Thais saved two setpoints but on the third the usually unflappable Nootsara Tomkom failed to set up Sittirak properly and the two players collided as they tried to get the ball over the net. Sittirak got up slowly with an apparent facial injury. The pain of losing the set 27-25 probably hurt more.
Sittirak stayed in the game but committed two early errors as the Americans breezed into a 5-1 lead, at which point the Thais called a timeout. Good blocks by Thinkaow and Apinyapong steadied the Thai ship, but the Americans still lead by three at the first TTO. At 13-10, the Thais got great hitting from Kanthong and Apinyapong (twice) and drew level, prompting Kiraly to call a timeout. Two sweet hits from Thinkaow saw the Thais go 16-15 ahead at the second TTO, but the match stayed close to 19-19 when a block by Paolini on Kanthong put the Americans ahead for good. They earned three setpoints on a tough hit by Larson-Burbach and a crisp cross-court shot by the same player ended the set and put USA 2-1 ahead.
Nothing could separate the two teams through to 7-7 in the fourth set but three straight points by Paolini put the Americans 10-7 up and forced a Thai timeout. The Thais levelled quickly with two shots from Sittirak and an unreturned serve from Tomkom, and the two teams stayed close until an ace by Sittirak gave Thailand a two-point lead at 20-18 and prompted another American timeout. This time, the Thais held on and the set concluded with successive USA errors.
After dropping three straight points to fall 3-2 behind in the deciding set, Thailand called a timeout. The Americans did likewise after dropping the next three, but it was level at 6-6. A sharp shot from Sittirak and a long shot by Larson-Burbach had the Thais two points up at the change-around but sloppy Thai defending allowed the Americans to take control and they moved into a three-point lead at 12-9. Thailand closed to within a point at 13-12, but Cassidy Lichtman brought up matchpoint with a shot that deflected off a Thai player. The Thais saved one matchpoint before Larson-Burbach thumped a winner through the Thai defence.

The win saw Brazil raise their record to 4-0 for 12 points while Russia dropped to 1-3 and stay on four points. It was the third time Russia and Brazil have met in the World Grand Champions Cup, but the first time Brazil have won. But Russian maintains a 28-22 lead in all FIVB events. Fernanda Rodrigues was the top scorer in the match with 17 points, including four blocks and three aces, while Fabiana Claudino added 14 with four blocks. Natalia Pereira and Sheilla Castro each contributed 13 points. Natalia Malykh led Russia with 16 while Liubov Shashkova added 13. Brazil outblocked Russia 15-10 and had nine service points to Russia’s four. Russia committed 22 errors to Brazil’s 21.
The Russians started the match brightly and were three points ahead at the first technical timeout, but coach Yury Marichev had to call a timeout when Brazil drew level at 10-10 after some good spiking by Adenizia Silva. A fine block by Iulia Morozova on Natalia Pereira saw the Russians two points ahead at the second TTO. They extended their lead to three points after a bad mixup on the Brazilian side of the net, after which Brazil coach Ze Roberto called a timeout. Three points later, Brazil failed to deal with a serve by Ekaterina Pankova and Ze Roberto called his players off court again. Blocks by Anastasia Shlyakhovaya and Liubov Shashkova helped extend Russia’s lead and Brazil didn’t help themselves with three late errors as Russia clinched the first set 25-18.
Brazil came back strong at the start of the second set, getting blocks from Natalia, Adenizia and Fernanda Rodrigues as they rushed into a 5-1 lead and Marichev called a timeout. The Russians were out of sorts and Brazil led 8-1 at the first TTO after a long shot by Natalia Malykh. But Malykh made up for that error by leading Russia’s revival with three excellent kills and a service ace that helped narrow the gap to just one point, when Ze Roberto called a timeout. Fernanda sent down a big hit followed by two service aces and Marichev hauled his players off court again. Fernanda then completed a hat trick of aces as the Russians failed to return her serve once again. Brazil were six points ahead at the second TTO and faced no trouble in taking the set, with a lame half-shot from Shashkova hitting the net to level the match at 1-1.
Marichev called a timeout after his team dropped the first four points of the third set, but his players responded well and were level at 6-6. Brazil moved into a three-point lead at 10-7, but Russia came back to lead 11-10, prompting Ze Roberto to call a timeout. Malykh again came to the fore for Russia as they moved into another lead at 15-12, but Brazil got a couple of good blocks from Fabiana Claudino and Fabiola Sousa and the scores were level again at 16. Two Malykh missiles drew the two teams level at 21 but a tipover by Walewska Oliveira and an ace by Natalia put Brazil in the driving seat. Sheilla Castro fired a shot down the right line to earn setpoint and a tipover by Fernanda put Brazil 2-1 up.
Both teams committed errors early in the fourth set but Brazil had the advantage and were three points up at the first TTO. Russia’s Natalia Dianskaya came up with two terrific blocks to level the scores at 9-9 but Brazil’s Natalia responded with a block of her own on the big-hitting Shashkova and followed up with blistering kill to open up a three-point lead at 12-9, bringing a Russian timeout. Russia closed to within a point at 14-13, but Brazil had a three-point cushion again at the second TTO. That became four points after a neatly disguised tipover by Fabiola and Brazil were able to cruise to the end of the match. Fernanda earned Brazil five matchpoints with a huge thump and a Walewska blocked Victoria Chaplina to end the match.

Japan was led by the dynamic duo of Saori Kimura and Saori Sakoda, both of whom has 14 points. Brayelin Martinez had 12 points in a losing effort. The winners held a 7-1 advantage in the blocking department while the defeated side dominated the blocking category 9-5. The Dominicans made 22 unforced errors to 16 by the Japanese.
The first set pitted Japan’s finesse against the power of the Dominican Republic, with the home team taking an early edge thanks to solid net play from Kimura and Ishii. Candida Arias bounced a pair of hard spikes to counter, but Japan moved out front 11-6 causing the Dominicans to regroup with a timeout. The home team played confidently, extending to 16-8 on an ace by Iwasaka, and despite a late rush from the Dominicans, closed out a relatively easy first set 25-17, led by five points from Kimura, including two aces.
Japan continued to have good serving in the second, this time from Shinnabe, who put the home side ahead 7-4 with a gorgeous ace. Sakoda got busy in this set, displaying her patented aerial attack throughout, putting Japan ahead 20-16 with a hard drive down the sideline. A drive down the center from the hard hitting Iwasaka gave Japan set point at 24-18, setting the stage for Ishii to take the second set with her ninth point (25-19), to lead all scorers at that point.
Isabel Peña of the Dominican Republic was jittery to start the third set, with a couple of early errors. But she would pull together and push her side out front with a number of scores to jump out 12-8. That seemed to spark Saori Sakoda, who brought a surprising block on Rivera at the net (12-9), and then later another stuff on Martinez to tie at 14-14. But the Dominicans showed incredible spirit, keeping an edge to grab a set point at 24-22. But Kimura responded in true superstar fashion, helping her side fight off four set points to eventually take the set, with three scores late from her, taking the set 29-27, and the match 3-0.