WGP: Brazil glistens for the ninth time! Did China give up last match? 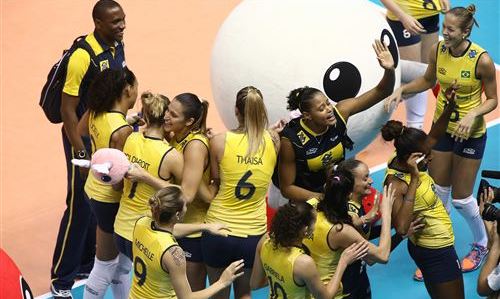 Having beaten China in straight sets, Brazil triumphs in the FIVB World Grand Prix ninth time in history! Moreover, “Canarinhos” set up a new record achieving a perfect game balance with 5 wins, 15 claimed and any lost sets. The very match turn out to be extremely one-sided. Lang Ping, the legendary Chinese coach, did not brought in two her best players and team leaders Thing Zhu and Ruoqi Hui despite having big chances to pick up tournament. Did “Jenny” doubted the possibilities ofher wards and gave up the struggle.

China started the first set poorly and didn’t really get much better. China coach Lang Ping called a timeout as her team fell to 1-6. Wang Yimei managed to land a couple of kills but her teammates struggled, perhaps not surprisingly as they had a tough, five-set match against Japan that finished just 19 hours before the start of the Brazil match. Zhu Ting, who scored 33 points against Japan, was left out of the starting lineup and China’s attack looked fairly toothless early on. The Brazilians meanwhile had won all their matches 3-0 and were looking to end their three-year run of runners-up medals. A block by Sheilla Castro put Brazil 16-8 ahead at the second technical timeout and it was one-way traffic after that. Set point came on a spike by Gabriela Guimaraes and wide shot by Wang put Brazil 1-0 up.

China were a bit more solid in the second set. Wang started the set off with a cracking blast and Zeng Chunlei made a clever shot at the net. Zeng also came up with a good block on Gabi as China kept pace with Brazil. They were still only a point back at 10-9 but then Brazil turned the heat up, with Sheilla sending down a variety of winners and Fabiana making a good block on Wang. A double touch by Zeng saw Brazil five points ahead at the second TTO. Gabi served an ace and Fabiana blocked Zeng as the Brazilians widened their lead to eight points at 19-11. A missed shot by Wang brought setpoint and Thaisa Menezes put Brazil 2-0 up.

China were looking good again at the start of the third set. Yang Junjing blocked Gabi and Wang did the same on Sheilla as China moved into an 8-6 lead at the first TTO. When China got a third block from Shen Jingsi to make the score 11-7 for China, Brazil coach Ze Roberto called a timeout. Brazil were soon level at 12 and after a rocket from Fe Garay put Brazil 14-12 up, Lang Ping called a timeout. Brazil were four points ahead at 20-16 but China closed to within a point at 20-19 after Gabi was blocked and then sent a shot wide. Championship point came on a super block by Fe Garay on Zeng and Thaisa ended Brazil’s quest for gold with a solid hit down the middle.