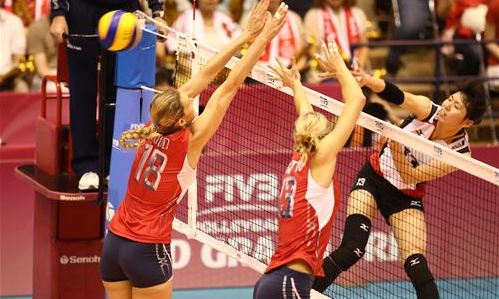 As the in Pool’s M contest takes place in Japan, you can claim Bulgaria committed seppuku or harakiri. “Lions” defeated the Czech Republic, but lost one point due to tie-break struggle and probably have to dispel all dreams about Final Six participation. What is more, USA overcame Japan, enhancing the points achievements over Bulgaria. Will Bulgaria or USA go to Sapporo? The answer tomorrow!

The win brings the USA up to second place in the World Grand Prix Rankings, although later matches on Saturday will likely bring their rank down slightly. The USA still has a good chance of making the Finals in Sapporo. Japan is automatically qualified for the finals, as the host country.

Not much went right for Japan in the first set – service, reception and setting were all problems – and USA cruised to an 8-3 lead at the first technical timeout. After a dropped point, Japan coach Masayoshi Manabe hauled his players off court for a talk. Yukiko Ebata and Saori Kimura responded with some decent hits that narrowed the gap from 9-3 to 9-6. For a while, Japan started to rediscover their usual dramatic defending. A service ace by Haruka Miyashita made the score 10-11 which prompted USA coach Karch Kiraly to call a timeout. A sharp spike by Risa Shinnabe then drew Japan level at 11, but the team could not rally. USA was up 16-13 at the second TTO and after two blocks by Nicole Fawcett on Ebata the USA was up by five points. A wide shot by Shinnabe handed set point to the Americans and Kelly Murphy put them 1-0 up with a crosscourt kill. Japan failed to earn a single blocking point in the set.

Manabe only needed three points of the second set before deciding to take his team off the court. The Japanese players were only occasionally sparking into life, although they did finally manage to get their first blocking point. After the Americans cruised from 8-6 to 11-6, Manabe called his second timeout, but a kill and a block by Kimberly Hill ensured his team was still five points behind at the second TTO. Aided by good blocks from Akari Oumi and Mizuho Ishida, Japan closed the gap to 20-16 and Kiraly called a precautionary timeout. But he did not need to worry as his team earned set point on a kill by Hill and went 2-0 up when Fawcett blocked Kimura.

The two teams were level to 6-6 in the third set before the Americans moved ahead on the back of a solid drive by Hill and a neat tip by Alisha Glass. A service ace by Kimura tied the game at 10-10 and the introduction of Miyu Nagaoka brought fresh life to the Japan team. She quickly thundered down three big spikes to help her team to a 16-14 lead at the second TTO, but the Americans took the next three points and Manabe called a timeout. Christa Harmotto came up with two big blocks for USA, but the pumped-up Nagaoka responded with one for Japan. Kiraly called a timeout after a USA mix-up put Japan 20-19 ahead, then called another two dropped points later after a service ace by Kimura. A wayward hit by Kristin Hildebrand handed Japan setpoint and an error at the net by the Americans gave Japan their first set of the weekend.

Manabe had his players off the court after dropping the first four points of the fourth set but his team could only manage to pick up two points before the first TTO. Manabe called his players in again after dropping three straight points to fall seven points back at 14-7, but with only Nagaoka offering any resistance, there wasn’t much the coach could do. The Americans were five points ahead at the second TTO – despite a three-point burst by Nagaoka – and eased their way to the finish. Two good hits by Kelly Murphy brought up set point and captain Hildebrand finished the match off.

The Czechs got off to a solid start with Andrea Kossanyiova and Havlickova attacking from the sides, while Strashimira Filipova got in a few good hits for the Bulgarians. The Czechs took an early lead and held on to it. They were two points ahead at the first technical timeout and six in front at the second, but Bulgaria were still dangerous enough to merit two Czech timeouts – the first when Bulgaria scored three straight points to close to 15-19 and the second when the Czech allowed two straight serves from Mariya Karakasheva to go through them. But decent hits by Kossanyiova and Havlickova brought up setpoint, and a service ace by Ivana Pichotova put the Czechs 1-0 up.

Bulgaria looked sharper at the start of the second set and got a couple of good blocks from Hristina Ruseva as they moved 9-6 ahead. The Czechs replied with good blocks by Ivana Pichotova and Pavla Vincourova and moved to within a point after a good service point by Krist. After Bulgaria coach Marcello Abbondanza called a timeout, Bulgaria stretched their lead to six points after successive kills by Filipova, Vasileva and Ruseva. Vasileva brought up setpoint at 24-18 and a wide effort by Havlickova evened the set score at 1-1.

The Czechs took the first two points of the third set but then had a minor meltdown. Havlickova netted shot, Bulgaria was gifted a point after a receiving error and Havlickova then sent a shot long, which she disputed to the extent that she earned a yellow card. The upshot was that Bulgaria moved into a six-point lead at 10-4 before the Czechs found some momentum of their own and Bulgaria coach Abbondanza called a timeout at 11-8. But the Czechs were blowing hot and cold and found themselves six points behind at the second technical timeout before rallying to within a point at 17-16. Inevitably, another cold spell followed and the Czechs could only manage one more point in the set. A thumping drive from Vasileva brought setpoint and a setting error handed the put Bulgaria 2-1 up.

The Czechs came good again at the start of the fourth set and were four points up at the first TTO. Abbondanza called a timeout soon after when his team was six points back and starting to look ragged, but the Czechs held a five-point lead at the second TTO despite some good shots by Bulgaria’s Rabadzhieva. Havlickova kept the pressure on the Bulgarians – who closed to within two on three occasions – and brought up setpoint at 24-21 with a good line drive. Bulgaria pulled a point back before Emiliya Nikolova planted a serve in the net and sent the match to a tiebreaker.

The Czechs called a timeout after dropping the first three points of the fifth set and were soon four points behind. Two big hits by Filipova and a netted serve by Havlickova saw Bulgaria five points in front at the turnaround, and that proved too big a mountain to climb for the Czechs. They closed to within two at 10-8 but fell apart at the end. Havlickova hit a shot wide to give Bulgaria matchpoint and a block by Filipova on Kristyna Pastulova ended the match.