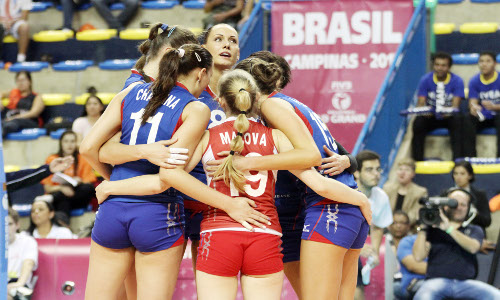 Game was really emotional in all sets. First set should have won Poles, but from result 19-14 they lost it. In next two sets we had an equal battle. After third set in hall in Campinas lights switched off and there was about 20 minutes break. Then the game was even more outstanding. Without no objections the best player of this game was katarzyna Skowrońska-Dolata, who played again as OH. She got 41 points (35/75 spikes and 6 blocks). Unfortunately teammates were only background for her, what proves scores: Joanna Kaczor (OPP) and Agnieszka Kąkolewska (MB) had 12 points and rest players had less. In Russian team we have more team work, 20 points got Natalia Obmochaeva (OPP), good impact had also middles: Irina Zaryazhko (16 points) and Anastasia Shlyakhovaya (14 points). Good start had  Tatiana Kosheleva (9 points), but she left court during third set and it seems that again health problems stopped her.

Match between Brazil and United States was shorter, but not less thrilling. American players had good game, but since the half of second set their game level dropped significantly. Important moment was substitution by Fabiana Claudino, impact on game had also double substitutions with Fabiola (Josefa Souza) and Sheilla Castro. Best scorers became Brazilian OHs: Gabriela Guimaraes and Fernanda Garay (both 14), American OH Kim Hill had 16 scores and MB Christa Harmotto also had 14 points.