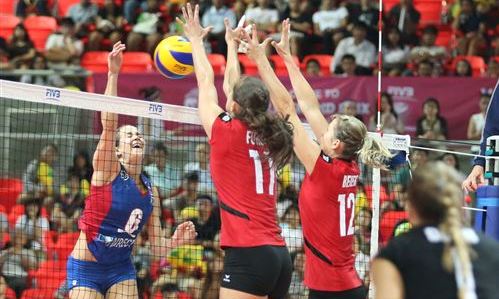 One more disappointment have to be swallowed by Russian fans and activists. After infelicitous Olympics,“Sborna” did not qualify to the World Grand Prix finals. In the last group stage match, Russia beat Thailand in tie-break while the other match of the day in Bangkok was conquered by Puerto Rico. It was the first success of the Caribbean team this season.Russia was classified on position no. 7, Germany on 11, Thailand on 13, and Puerto Rico on 18.

To allow their players valuable experience, Germany fielded several substitutions including Kathleen Weiss, Berit Kauffeldt, Saskia Hippe and Jennifer Geerties in the first set. Puerto Rico got off to a superb start, with powerful attacker Karina Ocasio and Yarimar Rosa puncturing the German defence with their explosive spikes. The Puerto Ricans raced to a 13-7 lead. To revive their fortunes in this tough set against their rivals, Germany fielded in highly-experienced captain Margareta Kozuch. However, their attempts were in vain when the Puerto Ricans continued their remarkable run to move ahead 24-19. The Germans gradually pulled their game to score straight four points to narrow the gap 23-2 until a fast attack from Sheila Ocasio handed Puerto Rico the first set win 25-23.

In the second set, Puerto Rico remained in strong form to lead Germany all the way. Trailing 13-16, the Germans heightened their defence and stormed back with Kozuch’s lightning-fast spikes and solid blocks to tie 18-18. From then, both sides gave it all-out. Puerto Rico still played cool under pressure to win the second set 25-23.

Conceding straight two sets, Germany fielded a strong line-up in the third set, among them were Christiane Furst, Maren Brinker and Denise Hanke. However, Puerto Rico played exceptionally well defensively and offensively to take the commanding 18-14 lead. Germany fought hard to even the score 23-23 and went on to take the close set 25-23.

In the fourth set, Germany attacked well to lead initially 16-9, mostly from the offensive mobility of Kozuch and the team’s effective blocks. They charged through to win the set and force a tiebreaker 25-13.

As Puerto Rico dictated the tempo, Germany gave another all-out performance in the thrilling decider to force another run. However, their intention was short-lived when the Puerto Ricans remained in incredible form to win the set 15-13 and the exhausting battle.

Cheered on lustily by the nerve-wracking drum-beating home fans of more than 7,000 in the full-house competing venue, Thailand stormed back from trailing 2-5 in the beginning of the opening set. Onuma and Wilavan Apinyapong became nightmares of the visitors when they took turns overcoming the taller blockers with their powerful attacks to help Thailand close the margin 17-17. From then on, both sides exchanged aggressive attacks. At 24-24, Onuma exhibited her exceptional talent to tear the Russian defence apart with her sharp cross-court spikes to win successive two points for the Thailand’s first-set win 26-24.

Smashing machine Nataliya Obmochaeva and hard-attacking Tatiana Kosheleva gave the world No.6 a successful comeback in the second set. With Obmochaeva overcoming the small blockers with her devastating spikes and Kosheleva attacking from the back row, Russia took the 21-15 lead. They never looked back since then, allowing the host side three more points to wrap up the set 25-18.

The third set was more thrilling when both sides entertained the big crowd with their incredible determination and brilliant form. Russia fared well under pressure. They attacked, blocked and boosted, using all what they had. Their greater determination was handsomely rewarded when Russia clinched the hotly-contested set 25-22.

Holding a 2-1 advantage, Russia maintained their poise, but things did not go their ways. Thailand won their home fans’ hearts with their guts and spirit to lead commandingly 10-4 before Russia stormed back to tie 16-16. The hosts put their acts together, with Onuma and Wilavan continuing their attacking onslaughts. Thailand took the thrilling set 25-20.

In the action-packed decider, both sides played up to their standards. Thailand recovered from trailing 1-5 to tie 7-7. Russia went on aggressive attacks to win the tie-break 15-11 and the grueling match.