WGP: Final Six rather out of reach of Russia 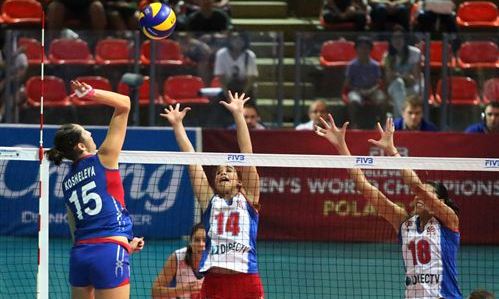 Russia claimed straight win over Puerto Rico, however,there would have to happen a miricle, which would move Russia to Sapporo for the World Grand Prix Final Six. Having beaten the hosts, Germany compleated the schedule of the second game day in Bankok.

The towering Russians, with six players standing up to 190cm tall, include powerful Nataliya Obmochaeva and Tatiana Kosheleva who utilized their height advantage to attack and block effectively in the first set. Russia began the match with an effortless set 25-8.

Russia continued to command in the second set. Puerto Rico, led by hard-attacking Karina Ocasio, fought to make amends for the first-set loss. Still, the highly-skilled Russians proved too strong to go down securing the second 25-16.

Height remained the might of Russia in the third set. Russia strategically rested their best players, instead fielding several substitutes including Natalia Malykh and Alexandra Pasynkova to lead Puerto Rico all the way. Despite putting up a strong challenge, the Puerto Ricans failed to make the grade. Russia continued their mighty attacks with impenetrable defence to capture the set 25-19 and the match.

Germany got off to a winning start in the opening set, with the 187cm-tall Margareta Kozuch unleashing a series of thundering cross-cross spikes to help her team take an initial 12-6 lead. The Germany’s blockings also worked out pretty well to foil most of the Thai attacking. Germany marched on their exceptional attacks to stretch the commanding lead to 24-15. The visitors allowed the world No.12 only one more point from the erratic serve by Denise Hanke to end the hosts’ challenge in the set 25-16.

Backed by loud cheering from over 7,000 home spectators, Thailand found their touch early in the second set to lead 8-7 initially before Germany started to produce the goods since then. The Germans mixed their splendid offensive combination of Margareta Kozuch’s spectacular attacks and scintillating blockings to close the gap 8-8. As Thailand could not maintain their momentum and became more prone with unforced attacking mistakes, Germany continued their winning streak to capture the set 25-14.

Conceding two sets, Thailand came all-out in the third set. Putting in a gutsy display, the Thais came whiskers of winning the set when they tied 24-24. However, their form in the final assault was still far from impressive as they made two straight unforced serves plus an erratic net play. Germany won the thrilling hard-fought set 27-25 and the match.