WGP: It is a dream start of Japan 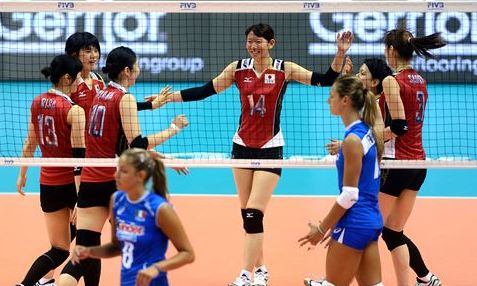 Japan tourned out to inhospitable in the closing game of the FIVB World Grand Prix 2013, held in Sapporo. Mazayishi Manabe’s players overcame Italy in straigth sets gaining settling up on the second place in Final Standing, just behind Brazil.

Italy had the advantage in the early stages of the match, cruising into a 7-3 lead before Japan fought back with some great defence that set up a good finish for Saori Kimura. Three Italian errors assisted the Japanese cause and the home team were one point up at the first technical timeout. After a neatly placed shot by Kimura and a nice slam by Riho Otake, Italian coach Marco Mencarelli called a timeout. Italy’s biggest problem was reception; Japan had three service points by the second TTO, which they reached five points in the clear thanks to a wonderfully placed shot by Kimura. Japan were winning more by guile than power and Mencarelli had to call another timeout at 12-18 to sort his players out. It didn’t work and Japan kept finding holes with clever shots. Nana Iwasaka brought setpoint with a nice kill down the middle and Yukiko Ebata put Japan 1-0 up with a super block on Caterina Bosetti.

Valentina Diouf slammed down two big kills and made a good block on Ebata to give Italy some momentum in the second set, but Iwasaka then sent down two serves that the Italians couldn’t deal with and Japan edged into the lead again. They were three points ahead at the first TTO and errant shots by Diouf and Cristina Chirichella stretched that to five. Good work by Kimura and Ebata advanced Japan’s cause and after a neat kill by Risa Shinnabe, Japan were eight points ahead at 18-10. Italy fought back and Japan lost their way as they dropped four straight points, reducing their lead to just three points at 19-16 when coach Masayoshi Manabe called a timeout. Italian errors helped Japan get back on track and setpoint came when Valentina Fiorin planted a shot in the net. A kill down the middle by Ebata put Japan 2-0 up.

Diouf again gave Italy a fighting chance at the beginning of the third set, but more good Japan defence and a bit of luck when an Otake serve trickled over the net allowed Japan to get a foothold in the set and the hosts were two points ahead at the first TTO. Mencarelli called a timeout when Japan moved into a four-point lead at 13-9 and the Italians started to power their way back into the set after that, trailing by only a point at 15-14 before Otake made a big block on Diouf. Two Japan errors evened the scores at 16-16 but blown serves by Chirichella and Carolina Costagrande handed the momentum back to Japan. A great block by Iwasaka on Diouf saw Japan go four points ahead at 22-18 and that was too much for Italy to overcome. Italy closed to 22-23 before Ebata spiked matchpoint and Indre Sorokaite sent a shot wide to end the match.