WGP: Serbia jumped on the podium! 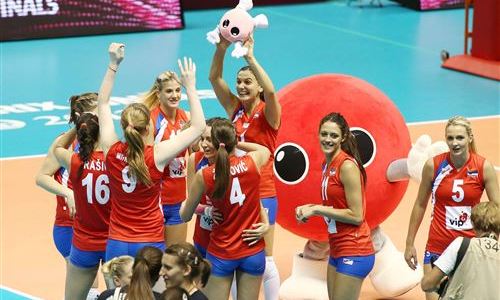 Serbia won the “European” match of the World Grand Prix Final 6 over Italy in tie-break and secured third place in overall. It is the greatest achievement of Serbia in this commercial tournament history.

Brakocevic got in a couple of smashes and a nice tipover early on but Italy’s Caterina Bosetti responded with some good shots of her own, but there was little to separate the two teams for most of the set. There wasn’t more than a point between the two teams from 3-3 to 10-10, when spikes by Diouf and Bosetti opened up a two-point gap. Two spikes by Jelena Nikolic drew the teams level at 14 before good hits by Martina Guiggi and Carolina Costagrande gave Italy another two-point advantage at 20-18, prompting Serbia coach Zoran Terzic to call a timeout. An ace by Serbian captain Maja Ognjenovic helped Serbia close the gap and the two teams were still level at 22 when Milena Rasic sent a serve long. Italy then held off two big spikes by Brakocevic to set up a winner for Diouf that brought setpoint at 24-22. Serbia then failed to deal with a serve by Letizia Camera and Italy were 1-0 up in the match.

The second set featured a remarkable turnaround by Serbia. Italy’s captain Guiggi came up with nice blocks on Brakocevic and Rasic to help Italy to a three-point lead at the first technical timeout. Italy challenged a call at 9-5, which turned a long serve into an ace and gave Italy a five-point lead. Valentina Arrighetti delivered successive blows and Italy were six points ahead at 13-7 when Terzic called a timeout. Bosetti delivered another ace for Italy and a kill by Costagrande put the Italians eight points up at the second TTO. After falling behind nine points at 20-11, Italy went to sleep. Brakocevic came up with two big hits and set Serbia on a remarkable recovery as they drew level at 22 on a block by Rasic and moved into the lead with another block, this time by Mihajlovic. Diouf brought the scores level at 23 before Rasic made a quick shot from the center for setpoint and Mihajlovic blocked Diouf for the set.

Italy breezed into a five-point lead in the third set but two classy, quick tipovers at the net by Maja Ognjenovic and a good block by Mihajlovic on Guiggi helped limit the damage, and the Italians were only two points ahead at the first TTO. A thumping serve by Brakocevic brought the teams level at 9-9 and three Mihajlovic missiles saw Serbia lead at 13-12. But after Mihajlovic sent one of her speedy serves long and the Serbians had a setting mixup, Italy led by two at the second TTO. Two Serbian errors and a thumper by Diouf put Italy 20-16 ahead and Terzic called a timeout. Good defending, especially by libero Monica De Gennaro, kept Italy on top and Guiggi earned seven setpoints with a spike. Costagrande then sent a nice shot down the left line to put Italy 2-1 up.

It stayed close in the early stages of the fourth set but Serbia pulled away from 8-8 with Ognjenovic coming up with a block on Bosetti and another crafty tipover at the net. A block by Rasic on Costagrande gave Serbia a four-point advantage at the second TTO and they were six points up at 21-15 after a block by Natasa Krsmanovic, and Italy coach Marco Mencarelli called a timeout. He called another one at 23-16 after Rasic blocked Arrighetti. It didn’t do any good. Costagrande sent a shot wide and Mihajlovic blocked Diouf to end the set and send the match to a tiebreaker.

Serbia took an early lead in the tiebeaker with Ognjenovic getting another tipover at the net and Mihajlovic sending down a couple of tough kills. Serbia were 8-6 up at the changeover and three points up after Bosetti sent a shot wide. Nikolic came up with a good block on Diouf and a rocket by Mihajlovic put Serbia 13-9 ahead. Serbia got matchpoint on a missed shot by Diouf and Mihajlovic sent down the winning shot to earn Serbia the bronze medal.