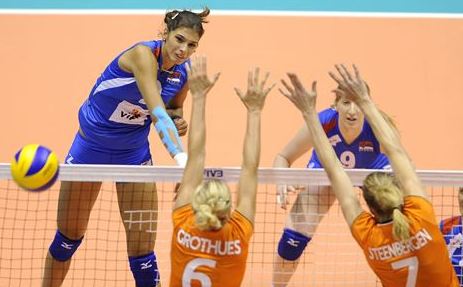 Serbia was not hospitable for the Netherlands in the first match of Pool F World Grand Prix struggle. The European Champion beat Holland black and blue with significant input of three stats Brakocevic, Rasic, Mihajlovic. In the second of the day, Karch Kiraly organized a light workout for U.S reserves, playing against poor and inexperienced Algeria.

In set one, the Dutch girls got off to an early 4-0 lead before Nataša Krsmanovic managed to get Serbia on the scoreboard. After the initial scare, the home side picked up the pace and went ahead 8-7 at the first technical break.  Serbia then built a steady gap (12-9) and maintained their advantage. They wrapped up the set at 25-18, with a confident block by Milena Rasic.

The second set began closely, running up to 6-6, before Serbia again got a narrow lead. Netherlands lost momentum and Serbia took set two 25-16.

The Dutch side led for the start of the third set, but again Serbia’s superiority, epitomised by Jovana Brakocevic’s strong game, gave them a strong hold on the match. They closed out a 25-21 win, to take the match 3-0.

It was an easy day for team USA, as they started the first set in and never let go. The Algerian women tried their best, but they could not pose a serious threat to the potent USA team. By the second technical time-out in the first set, USA already lead16-5, and it was clear that this would be a one sided duel.

The second set saw a couple of new US players on the court, who continued to dominate the newbies from Algeria. USA’s coach Karch Kiraly let all of his players participate in this match. In the end, it was an easy 3-0 sweep for the Americans, who are looking good ahead of the upcoming duels in Pool F.

On the other side, the Algerians added 38 more points to their overall score, summing up now a total of 144 points in their four matches combined. Algeria, is still searching for their first ever World Grand Prix win (and their first set win).

Rachael Adams led all scorers with 11 points on nine kills. Cassidy Lichtman pitched in nine points off of six kills. The Algerians were led by Safia Boukhima and Aicha Mezemate, who each tallied five points.