Women’s EuroVolley: Ex-captain of Russia crossed out by Marichev! 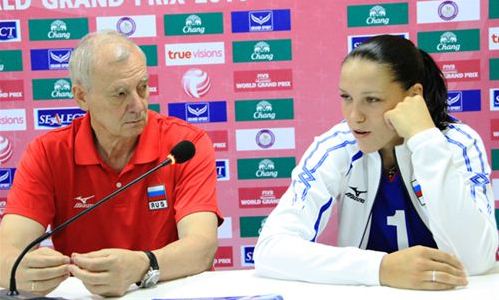 Yuri Marichev, the head coach of the national team of Russia, decided not to include Maria Borodakova in the squad for the European Championship which starts in early September in Germany and Switzerland.

The middle blocker of Dynamo Kazan and two-time world champion, this summer managed to win Yeltsin Cup and the Universiade with the “Zborna”, but during the Preliminary stage of the World Grand Prix, that the Russians finished in seventh place, she almost did not appear on the court.

The head coach of Russian national team, Yuri Marichev, commented on his decision not to include the Maria Borodakova in the squad for EuroVolley:

“Borodakova is an experienced and well deserved player who should not be sitting on the bench. Today, Anastasia Shlyakhovaya and Irina Zaryazhko established themselves in the roles of the two main middle blockers in the team, and they have justified the expectations related with the restructuring of the game and the team.”

Russian media recall that Marichev called in the national team the middle blocker Yulia Morozova, who did not take part in the World Grand Prix and other tournaments at the start of the international season. Also, recovery of Irina Zaryazhko is measured to last 2-3 weeks.

Fourteen players are called for the gathering in Novogorsk, which will be held from August 22 to September 3: