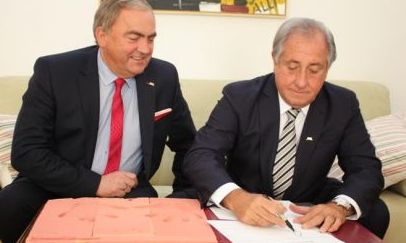 According to some unofficial information, the FIVB dignitaries are working on creating a new competition system of the next year’s World League and these planned changes will not only be cosmetic, but on the contrary, even revolutionary. World Volleyball Federation is going to invite surprisingly big number of teams involving several debutants like Belgium or few “immigrants” as Australia.

World League 2014 may be composed by 24 (perhaps 28) teams of all continents. These participants will be bend on three pools (“Elite Group”, “Middle Group” and “Claimants Group) that each of them will include 8 teams. The “Elite Group”, will be divided into two consecutive pools comprising 4 teams (Pool A and Pool B).

The elite group will consist of eight following teams: Brazil, Russia, Italy, Poland, Bulgaria, USA, Serbia and Iran or Japan. – Japan diverges from the rest of mentioned teams as far as its sports level. Iran has already proved its real value many times e.g. on the last World League edition either during the World Grand Champions Cup, that is why the Iranians have good chance of being included to the “Elite Group” Miroslaw Przedpelski, FIVB Vice-president said.

The bunch of six finalists will be created by two best teams of Pool A and Pool B (both from the “Elite Group), the host of the Final Six and a winner of the “Middle Group” that will consociate such a teams like: France, Argentina, Germany, Netherlands, Cuba, Australia, Japan/Iran.

The third division (Claimants Group), members will concentrate some worse teams which has not performed on the World League yet and could struggle for an advance to the compar Pool (Middle Group).

The final tournament will be held in Italy. The host city is not known yet, however it is said that Roma, Bologna and Pesaro are going to apply for the Final Six.

The ultimate decision is taken on FIVB meeting n Lausanne on Sunday, December 1.