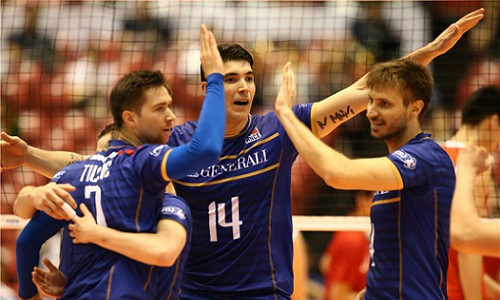 A record number of 36 countries just entered in the episode Nº 27 of the most commercial volleyball competition – FIVB World League.

The summer volleyball season just started in the World League and the 36 participants will be divided into 3 main groups (divisions).

What calls us our attention is also the fact that during the first edition of the tournament in 1990 only 8 teams took part in the competition. Which means that the number of the participants has multiplied almost 5 times.

Thanks to the widening and the change in the formula in the tournament during this season the teams of Bulgaria, Argentina and Belgium (that received wild card) are back in the elite of the world volleyball.  Last year these 3 teams played in second group (division).

The main novelty in the World League this summer is that not every team will have host matches (as is the case of Team Bulgaria, for example).

After having played all the matches in the different four-parts tournaments the first 5 teams in the ranking plus the hosts from Poland will play in the Finals in Krakow.

The formula is almost the same as the one of FIVB World Grand Prix having in the mind that main aim by using this formula is to gain time because of the upcoming Olympics in Rio de Janeiro.

It’s also important to point out that the ones that finish on the last position in their respective division will play in a lower one the next season (if any other changes wouldn’t be made in the formula…).

What about the other two groups?

The finals in second division will be held in Portugal. Apart from Team Portugal Cuba, Canada, Japan, South Korea, Czech Republic, Finland, Holland, Egypt (winner in third division in 2015) plus the teams of China, Turkey and Slovakia (these three received wild card) will be in the volleyball battle to win the finals in this group.

In third division comes back Germany (after having refused to participate in last year’s European Games in Baku). The finals will be held in Frankfurt. The finalist in the last European Championship Slovenia also will compete in this group. The teams of Qatar and Taiwan are the debutants in the tournament. The other teams in third division are Greece, Kazakhstan, Mexico, Montenegro, Puerto Rico, Spain, Tunis and Venezuela.

The winner in 2015 FIVB World League France won the tournament having started the competition in second division. This thing could never happen during this season because the winner of the second subgroup does not have the right to play in the finals of the elite one.

And just for the stats:

The team with most trophies is Brazil (9), followed by Italy with 8, Russia with 3, the USA with 2 and Poland, France, Cuba and Holland that have each one 1 trophy.

It’s time to enjoy and to “warm up” with this year’s FIVB World League for the Olympic Games in Rio. Let the volleyball summer begin!