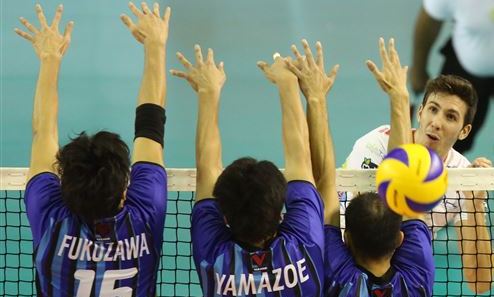 Not only we want to win the Italian championship, but I can promise that we will give everything to achieve this goal – said Alexandre Ferreira.

Besides the first and second set you didn’t play good. Your team regularly played in the final of the Italian Cup, so the disapointment is bigger because of that?

Alexandre Ferreira: – Yes, definitely. We regret that this game finished in this way, but it seems to me that the biggest difference made the service of both teams. We haven’t played well in this element, we made ​​a lot of errors. What is worse, in the last two sets we weren’t so focused as in the beginning of the game. We also decreased the efficiency of our attack. Copra Piacenza is a very good team and almost all the time had everything under control. In addition, they have most of their attacks finished immediately, in the first action, showing high efficiency. They played patiently, they used the contrattacks – they deserved to win.

Because of the weaker service you haven’t played so good in block in the last two sets and you were blocked 13 times.

– Yes, unfortunately and because of that we played bad in the field, in defense. However, we have good players: the opposite, the middle-blockers who usually much better play in the attack and in the block. This time it didn’t work out. For us it was a tough game because rivals, for all time, push pressure on us. Initially, we were able to resist them but with the time it was just worse and none of us could find a recipe for this, but everyone tried their best.

Also Sokolov, who is the leader of the team, this time wasn’t.

– Unfortunately, this time he wasn’t able to lead us to victory but this is because of the fact that he had a longer break in the game, he just came back to trainings after an ankle injury. This isn’t an excuse because we have in the team two opposites, both very experienced. Other athletes, like me and the rest of the receivers, perhaps aren’t so experienced, but also didn’t play at their level. We need this type of matches to gain an experience a and improve our skills.

The opportunity to gain the experience you had also in the World Club Championships or in the Champions League.

– It is extremely important for us because basically we’re a young team. Such matches, like these, allow us to gain not only experience, but also the self-confidence. We played a lot of matches in the Champions League, we did good in this competition so we may be pleased with ourself. Also, the World Club Championships were positive. So now it’s easier for us to catch some distance to everything, we have the proper approach to games, we don’t get too tied up. At the beggining it was difficult because we played two games a week, and for some of us it was something new, but after time we’ve adapted to it. Now we just need to use our knowledge, experience and skills acquired during all these tournaments.

What will you afford in the fight for the Italian championship?

– For us it is the last opportunity to win a trophy. Although this season isn’t lost – we have the Italian SuperCup, we won the third place at the World Club Championships. However, the scudetto is extremely important to us – this is our goal. We need to focus on hard work, to give our best to win it. Of course, not only we want to win the Italian championship, but I can promise that we will give everything and every one of us leave on the floor in the heart to achieve this goal.