Bartosz Kurek:You have to wait for my first interview in Italian 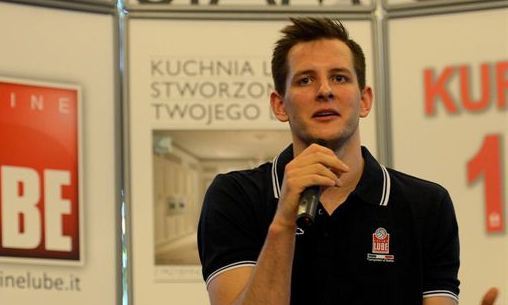 Bartosz Kurek is well-known name in the volleyball world. The Polish player joined this season Lube Banca Macerata, coming from VC Dynamo Moscow.
Kurek gave an interesting interview , talking about the season so far in SerieA1 and the upcoming match in Champions League against Posojilnica AICH. Is he learning Italian and how it is going so far?

– Bartosz, let’s start with the victory of your team over Latina in the last round of SerieA1. Was it difficult?

– Yes, it was a taugh match and we are very happy that we won. Latina played a really, really good game and that’s the most important thing- that we win for three points. We kept out to them and in the end of every set we showed that we end up better. Maybe with more luck, maybe with more skills

– It was the third victory in a row for Lube with result 3-0. Does this mean that the team is growing up every match?

– Yes, we can say that we are growing up with every game, but we need to keep working and  stay concetrate all the time because there are a lot of taugh games . We can not settle and think „Ok, we’re great and that’s it”. We need to practice, to work hard and I think that if we do that everything we’ll be good.

– On Wednesday you play in Austria for Champions League. The coach Guiliani said that you must try to take the victory by 3-0 because of the group and for the qualification would matter every single set.

– I totally agree. We have to go there and do our job. And our job is to win and gain three points , hopefully also three sets without losing any. I hope it will end up like this. We’re in a group with Kazan and Novosibirsk and if there is one weaker team on paper you have to beat them as hard as you can.

– Last week on the official internet site of Lube 40% of the visitors were from Poland. That means that the team has a lot of support from Poland because of you.

– That’s so nice to hear! I want to thank to all of the Polish fans. It’s great and I hope that my new team will do some good things for the Polish public.

– How long do we have to wait for your first interview in Italian?

– Haha, you have to wait till I feel confident with the language. I promise that I will make a lot of work.I learn hard, I study hard but it’s not that easy .

– Just to start. Can you say something in Italian for the Italian fans?

– Oh, for the Italian fans. I don’t know, it will end up like this (laughs) : Grazie per tutti tifosi che vieni a nostre partite.