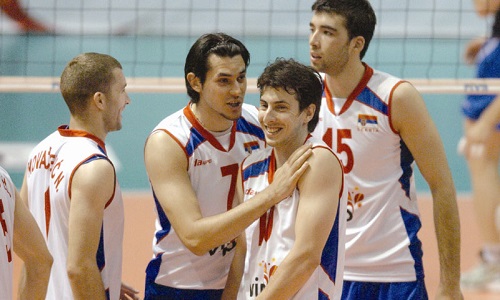 We always try to leave a heart on the court and it must give results – said Miloš Nikić after the match for third place. Serbian also admitted that to get bronze is an amazing feeling and that for two years his team will be more dangerous.

It has to be a positive feeling to become the third team in Europe.

Miloš Nikić: – It’s true, it is incredibly nice feeling to finish the championship with such good match, winning a bronze medal. For our team it’s a huge success, as there is big number of players, as Atanasijević, Jovović or Lisinac for which this is the first such tournament. For them, without a doubt, this is an extremely important and valuable experience. I think it will help us to grow and every year we’ll get better and better.

The joy has to be bigger because of that your bravery, after lost semis, was awarded.

– We always try to leave the heart on the court and it has to give results. We trained hard for several months, we played a few control games, we did everything possible to prepare good for these championships. It is very important to us to give everything on the court, to play as a team, to support each other. In our team there is no individuality, we are a team.

In the second and third sets, however, it was close. What did you think then?

– To be honest – nothing special. Bulgaria is a good team that in the last few tournaments reached the semi-finals. All of these players are really strong. Maybe in the third set they scared us a little more, but because of that ​​the game was much more exciting (laughs).

You mentioned that you have a young team – whether in your opinion do you have players who can succeed brothers Grbić, Miljkovic or Vujevic?

– I think yes. Our setter, Nikola Jovović is very talented and perspective. I think he has the chance to become a great player. The same I can say about Lisinac. For them it is the first senior European Championships, as well as for Atanasijevic. They did a great job and they are really good players.

Your goal, at the beginning of the season, was to get promotion to Final Six World League – it failed. However, bronze medal of ECh is the perfect end of the season.

– Certainly, this year was very successful. Now we have to cope without Ivan Miljkovic who led us to the victory in the last championship and despite this we stood on the podium at these these championships. I think we can consider this as a great success and in two years we will be even more dangerous. These young players already are playing great, but I think that at the next championship we have a chance to win the gold.

So far, every year you changed clubs. Now you decided to extend the contract with Gubernia Nizhny Novgorod. Why?

– I played there last season and I have to admit that I found myself there. I feel good there so I see no reason to change the club and I decided to stay in Nizhny Novgorod for one more year.

How would you assess the level of the Russian league?

– I think that at this moment Superleague is better than Serie A. For the last three years the Italian league level slightly decreased compared to previous years. Really, I can say that now Russia has the strongest league in Europe.