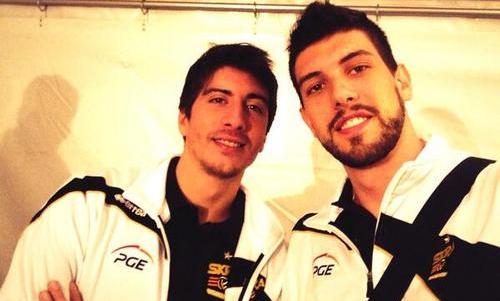 Argentinean Facundo Conte, missed the national team season and FIVB World League this summer due to an injury to his right shoulder that he sustained during the Argentine’s national team training camp in late May.

Conte wasted no time, opting for surgery only one week after injury, with a clear goal to return to competition as soon as possible.  Facundo underwent a successful surgery in May and has been rehabilitating his shoulder ever since.

“I feel much better, but the rehabilitation is long and hard”, admits Conte. “I’m working on it. The actual issue with the injury is solved, but now the focus is to get back to top playing condition.”

After supporting his teammates during the Final Round of the FIVB Volleyball World League in Mar del Plata, Argentina from the sidelines, Facundo departed for Italy to continue rehabilitation and to commence preparations for the next club season with his new club in PlusLiga, Polish PGE Skra Belchatow!

With preparations still underway, Conte has made the leap from his former Russian club Dynamo Krasnodar to Polish PGE Skra Belchatów.  Having arrived at the end of August, this player is excited about this new adventure.

“I really like the Polish league and the Polish people and I am ready to enjoy my time with my “brother” Nico (Argentinean setter Nicolas Uriarte).  I am joining a good team and a club that has a lot of titles and a rich history in this sport! I’m happy to be part of this great club!” – said Facundo.

Playing with his teammate and best friend, Nicolas Uriarte, was one of the main reasons why Facundo picked Skra.

“It’s definitely a lot more motivating and an easier transition to play in a new country with your friend right next to you“ explained Conte.