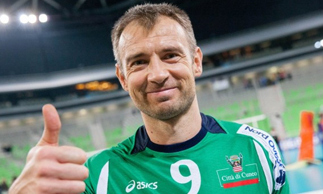 Nikola Grbic, who spent almost the whole career in Italy, leaves out Bre Banca Lanutti Cuneo and Apennine Peninsula after 20 years. The legendary Serbian setter is going to fulfil a vacancy in Zenit Kazan’s composition ensuing due to a terrible knee injury of Lukasz Zygadlo.

This transfer has been being predicted since several day just after a terrible news about Lukasz Zygadlo injury and now, it is officially confirmed. Nikola Grbic gives up Bre Banc Cuneo and his second homeland, which is Italy, for the richest volleyball club in world Zenit Kazan.

Nikola Grbic debuted in Serie A in 1994 to spend almost two decades right there. He was being employed by eight teams including the premiere Gabanca Montichiari, Sisley Treviso, Asystel Milano, Copra Piacenza, Trentino Volley and recently Cuneo. During these 20 years, Grbic won “Scudetto” only twice in 2008 with Trentino Volley and 2010 with Bre Banca Cuneo.

As the Russia environment will be totally new for the 40-years old player, he may need an introduction that can be ensured by Alexander Volkov, who cooperated with Grbic three years ago in Cuneo.

The previous club of Grbic, Bra Banca Cuneo, has already completed the loop-hole after him singing contract with Manuel Coscione and Nico Freriks.

Not only the activists of Piemonte had to find a substitute for Nikola Grbic, but they also needed to discover an alternative for injured Javier Gonzalez.