R.Stoytchev: I would be happy if I have the chance to return to Trento 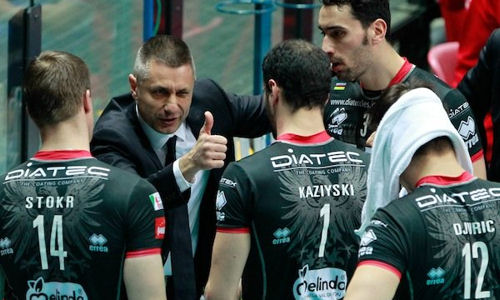 The ex-head coach of the volleyball champion of Italy – Itas Diatec (Trento) Radostin Stoytchev gave an interesting interview for volleyball.it.

Have you thought about a return in Trento?
I didn’t want to go away. I have spent there six wonderful years. The club has offered me wonderful conditions for working, but after that I was missing some resoures. Despite all the attempts and thoughts that it is impossible, my contract expired.

For how long have you signed with Halkbank (Ankara)?
I haven’t signed anything yet, but we have talked for an year. It has never been discussed an option for more than one year. Even the players signed for an year, and they’re on a loan. If there is a chance for me to return to Trento, I would like to do it. My family is in this town, we’ve just finished the building of our new house there

Did you leave because of the money?
No, the money has never been the main thing for me. There could not be any relation between moment and Trento, and our six-years- history. I have never had any big requirments, from Trento, I have always signed the proposal made by President Mosna.

But why did you leave?
It is not true that I left. I quited, because I was forced to help in this situation. I hope that Trento will have the resources to make the town happy. This team is very important to the town, because the team gives the town popularity. If the could help to relive this project, there is a very good basis for this to happen.

Don’t you blame anyone?
No! I want to say “thank you” to so many people. And I already have done it with an open letter. Trento is not only job, I’ve gained many friends here, me and my family- we feel really good. The friendship lasts. Our relationships last forever. Actually, I feel that Trento is my home better in comparison to when I was there.

What if you meet Trento in Champions League?
It would be interesting to meet Trento on the court. It would hurt me right in the heart..but everything is allowed in sports.

Did you gave the final word for the new team of Trento?
This is not my responsibility.

Then, did you have the final word for Bulgaria?
No, no, this is something different. I liked Bulgaria in the World League. If somebody made me make a prognosis about how Bulgaria would play and what result it would reach…I wouldn’t do it. Bulgaria is in a period of change, but the result in Mar del Plata gives confidence to the players. I am happy about the players.

There are still supporters in Bulgaria, who protest against the President Lazarov because of what happened with Matey Kaziyski and other bad decisions of the federation.
You saw them. There are people who keep on claiming that I am paying those people. This makes me laugh a lot. These people protest more than one year. But how much would this cost me? I want to say that I don’t know these girls and boys, I don’t know anybody personally. But these are young people with aims and ideals, with principles. They’re organized by the social networks, which I don’t use…