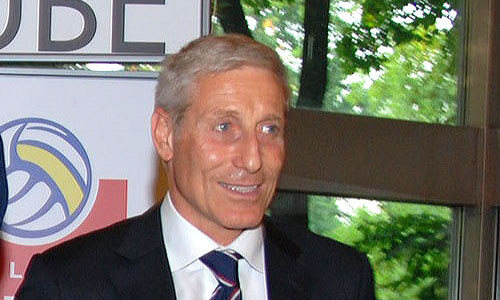 The Polish fans are the best in the world – said sport director of Cucine Lube Banca Marche Macerata, Stefano Recine. He also told us about the transfer and season in Serie A and about Matteo Martino.

In the past you were a player. Does it help you working as a sport director?

Stefano Recine: – Yes, certainly! For seventeen years I played in Serie A1, and it certainly helps me working as a sports director. This is because I know the reality, I am able to find myself in the situation of players, look at the situation from their perspective, with their eyes. In the past I played with Anastasi, with Gardini, with all of them for many years. It really helps me now and I believe that is one of the things that are essential.

And isn’t it hard for you to stay calm while being at the “other side”?

– It’s hard because I am a very impatient person (smile). However, after a minute or two, everything passes and I calm down (laughs).

Is it, in such a strong team as Lube, more difficult to be sport director?

– It’s definitely harder because we have a pressure to always win everything. And it’s never easy. Last season we had a really bad luck – two great players, Savani and Kovar, were injured at the start of games, and even though we had a very strong squad, when they fell out of the game, it was very hard for us. After all it’s not an excuse for us.

If you’re talking about the team, many teams have contracted many players, Lube only three. The team is closed or are there plans to make other transfers?

– In fact, we have maintained a very strong squad, basic players from the previous season. Therefore, we planned three, four transfers. We have a strong team so we don’t need a lot of new players. We lost Savani, but in its place we have Kurek. Really, we do not need more than that to change much – we will only need to rejuvenate the bench.

I thought that you will want to avoid repeating situation from last season and zou will build a strong, long bench.

– I understand, but we will have a good player on the bench – Kovar or Parodi. We can’t contract the big stars in order to sit on the bench. In the upcoming season it will look like that in our team will play seven or eight very good players and the rest of the team will be completed with young, talented volleyball players. Last season there were at the bench Starović, Kovar, Pajenk, Kooy – they’re really great players and it was difficult for them to accept the role of substitutes. Now Kooy and Pajenk were sent to Polish clubs where they can play and they deserve it, because as I said, they’re great volleyball players. And we are planning another transfer – we need another attacker, Italian. (the interview was made before signing contract with Giombini)

In recent years Lube is the only club that has such an interest with the Poles. What is the source?

– What? I really, really like the Poles! Players and people from Poland. I have about them the best minds and I’m always happy to see them in the team. I was very sorry to hear about Arkadiusz Gołaś, who unfortunately died in an accident, but I am absolutely convinced that he also would work well with us and would play fantastically. What can I say – I’m just a fan of Polish players and I really like them.

When we talk about Kurek, his last season abroad wasn’t good. Aren’t you afraid of the risk of signing a contract with him?

– Yes, I am aware of the fact that his last season’s wasn’t good, but I’m not interested with that. He’s still a great player. I believe that if he will be happy, he will feel well in team, he will play good. Russian team wasn’t lucky for him.

Lube always fights for the highest goals – what are your expectations for the upcoming season?

– We want to reach the finals of any tournament, whether national or European. It is a difficult task, especially when it comes to the Champions League, because we got a tough group with two Russian teams, Zenit Kazan and Lokomotiv Novosibirsk. Nevertheless, we are optimistic.

The biggest problem may be that we have a new setter (Michele Baranovich – ed.), who will need time to aclimatizate in the team, but I’m happy that he has joined our team and I believe it’ll be good also for us.

In Lube play many players who are in the starting six of their NT. We can say that this is the main strength of the team?

– Yes, we have four, five volleyball players in the Italian national team, two Serbs – they are the strength of their national team, and therefore also for us this is a huge gain. Additionally, we have a fantastic French libero, Henno.

Everybody heard that the Serie A is not exactly what we call a professional league: many clubs do not pay volleyball players. Is that true?

– No, such situations doesn’t occur in the Series A1, only in Series A2. The Serie A1 clubs are required to have a budget of at least 90% of the budget of last season, and additionaly they have to pay contributions to the Lega Pallavolo which run if it is necessary. It’s enough that clubs were solvent. There is no way that any team doesn’t pay its players.

So you think Serie A is still one of the best leagues, the most attractive for volleyball players?

– Absolutely. I think it’s a very demanding league, its level is very high, it is very developed tactically. Players love it, not only that it is attractive in sports point of view but it’s also about the living conditions in Italy.

As for the fact that it is the best league… I think that when we talk about fans, PlusLiga is the best one. But if we are talking only about the sports aspect, it is hard to say, but I think Serie A is in the top three. I don’t like to talk about which of the leagues is the best in my opinion, but I think the great players very often choose the Italian league.

Financial problems did not affect significantly Lube. But do you think about it, to protect your club in the future? Do you have developed system of training the youth?

– It’s not like that the economic crisis in general didn’t influence us – also we had toreduce a little the budget. Therefore, our bench won’t be as wide and we put on it youth.

In the last season our youth team won four league titles in national competitions. For them it was an incredibly successful year. However, we lack the last piece in the training of young people – we have talented players under the nineteen years old, but not older who may play in Serie A. We are still working on it and I believe that it will soon bring the results.

I have to ask about Matteo Martino beacuse one of the Polish teams is interested in him. And for now Lube is the only club where he played more than a season.

– Do you know why this had happened? It’s because of me, because I’m really patient man (laughs)! He is incredible! This is not a bad person but very, very strange. He’s still, however, player with great potential and skills – after Bernardi and Papi he’s the biggest Italian volleyball talent. He just needs to understand that he should work on himself and then he will become better.