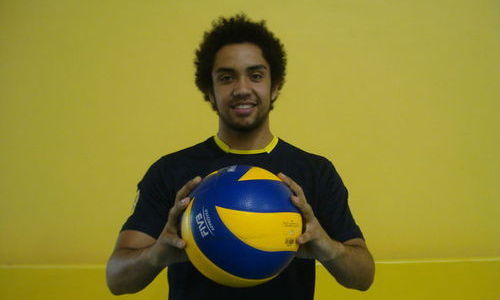 One of the youngest setters in the Brazilian Superliga, Fernando Kreling is a member of the senior national team’s wide roster and has a long list of achievements for someone his age.

Fernando, nicknamed Cachopa, is a product of one of the most prominent volleyball schools in Brazil nowadays – the threefold champion Sada Cruzeiro. The Betim-based club has been the one to beat in the Brazilian elite division for five years and have recently relied on a mixture of experience and young talent in order to establish and maintain their nation-wide hegemony. And whereas their first-team stars are well-known to the volleyball audience and have even won the Club World Championship twice already (in 2013 and 2015), the club can’t complain from a lack of prospective youngsters as Cruzeiro’s B team won the Superliga B, Brazil’s second division, in the previous 2014-2015 campaign.

Kreling, who turned 20 in January, is a back-up choice of the Argentinian coach Marcelo Mendez because Cruzeiro’s starting playmaker is the omnipresent virtuoso William Arjona. Despite the lack of many playing minutes, there is hardly any better place for a young Brazilian setter to learn and progress than at the reigning Club World champions while patiently waiting for regular first-team volleyball. Had Fernando shown no sign of further improvement, he would’ve never been called to Bernando Rezende’s wide roster for the 2015 World League. Last year’s call-up is perhaps one of the many the young setter is going to receive.

Cachopa was team captain of the Brazilian formation that took fourth place at the 2015 FIVB U21 World Championship in Mexico. Again in 2015, back then 19 and younger than his teammates, he was part of Brazil’s U23 squad that finished fifth at the World Championship in the United Arab Emirates. However, at the previous and inaugural U23 World Championship, which was held in 2013 in Uberlandia, Brazil, Kreling was the youngest player of the winning Brazilian line-up.

Typical for most Brazilian setters, Fernando lacks in height. His 185 cm could be problematic for any other nook on the globe but not in South America. Fast and technical volleyball is a trademark for this region and Kreling compensates for his lower block reach with fast hands and good defence. As a matter of fact, William Arjona stands at the same height as Cachopa.

Don’t be surprised if Sada Cruzeiro’s next generation setter enters the court straight from their bench.