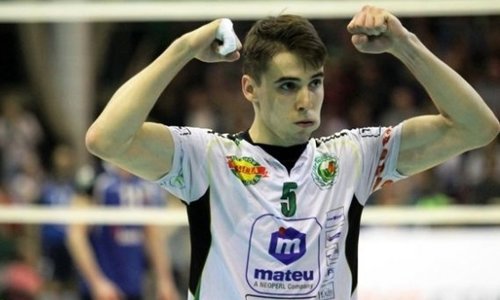 Our next member of the Talents series is one of Bulgaria’s new national team players. Although no Best Youngster award is granted in the Bulgarian Sami-M Superliga, Martin Atanasov would’ve certainly been the favourite of the 2015-2016 season.

The 19-year-old outside attacker had been relatively unknown to a lot of specialists even in the domestic league before he won the gold medals with his team a month ago. Product of Levski Sofia’s volleyball school, Atanasov played for the ‘blues’ last season when he and his teammates, composing one of the youngest teams in the league’s history, fought to avoid relegation till the very end. Several of Levski’s talents, including Martin Atanasov, as well as the opposite Velizar Chernokozhev and the middle blocker Alex Grozdanov, were recruited by the head coach Miroslav Zhivkov, someone who is capable of developing raw talent, in Dobrudzha last summer. The Dobrich-based team’s selection was the climax of the club’s development in the last 3-4 years. Cup holders and vice-champions in 2015, Dobrudzha 07, with Zhivkov at the helm, replaced some of the experienced players with fresh blood and reaped the fruits of this decision probably earlier than anticipated. Dobrudzha 07 were recently crowned Bulgarian champions for the first time in their history and won the silver medals at the Cup finals, losing to a reinforced (with national team players) Neftochimik 2010 side.

The outside attacker Martin Atanasov started the season a bit timidly, just like the whole team. Dobrudzha seemed to struggle a lot at the beginning of the campaign. Gradually both the player and the team started collecting points and wins combined with some very impressive performances. Atanasov became a reliable receiver, often carrying the team’s reception line on his shoulders. With his 197 cm, however, he also demonstrated good numbers in attack. His style reminds of Plamen Konstantinov’s and it is no wonder why the latter, currently guiding the national team as a head coach, invited Atanasov in the wide roster for the summer. Martin successfully mixes strength, precision, and technique when at the end. His height helps him to be effective in blocking the opponents just as well. His serve is still a subject of improvement, although his floats are not to be underestimated. Overall, his qualities make him stand out among the rest. And don’t forget that he is still just 19!

How did his and his team’s story develop? Dobrudzha finished on the fourth position after the regular season but went on to knock out the defending champions Marek Union-Ivkoni in the quarterfinals, the regular season winners Neftochimik 2010 Burgas in the semifinals, and Montana in the final series. By the end of the season everyone was already talking about Zhivkov’s youngsters and Martin Atanasov as hopefuls for the next Olympic cycle.

It is a perfect time for the 19-year-old to step up with the national team jersey. Bulgaria won’t play a lot of international matches in 2016 and there is no pressure to achieve results this time. Moreover, Miroslav Zhivkov has been appointed as the head coach of Bulgaria’s B team that is going to participate for the first time at the European League. So you will have the chance to watch Atanasov as he marches enroute to the senior team.