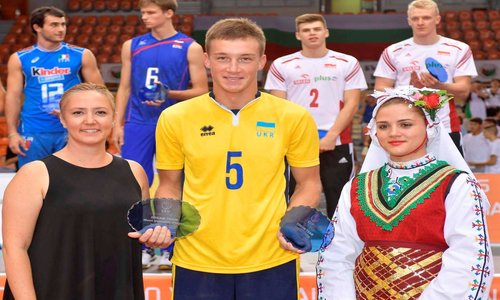 Ukraine may not be directly associated with the best volleyball teams in the world, or even in Europe for that matter, but a closer and more detailed look at their volleyball school will result in a handful of names worth mentioning. The latest addition to that collection is a very talented outside attacker who has achieved great results both outdoors on the beach and indoors – Oleh Plotnytskyi.

Little did the teams drawn in Pool I at the CEV 2016 U20 European Championship in Bulgaria know that the second semifinal berth, next to the pre-tournament’s favourites and eventual winners Poland, would be taken by the alleged outsiders from Ukraine. The youngsters from the former Soviet republic won their Finals tickets in the last possible moment by beating Romania in Valladolid, their only win in that decisive qualifier in Spain, and finished on the life-saving second position thanks to a better set ratio. They arrived in Plovdiv as outsiders and public opinion considered them weaker than their pool opponents Poland, Bulgaria, Germany, and France. Being two sets down in their opening match versus the hosts Bulgaria, the Ukrainian boys, including one player in particular, started a very impressive run and demonstrated something remarkable that would be remembered and exemplified at these continental age-group championships.

The 19-year-old Oleh Plotnytskyi, the motor pulling the Ukrainian locomotive, was in Greece competing at the CEV U22 European Beach Volleyball Championship literally days before the start of the U20 indoor tournament in neighbouring Bulgaria. Having finished fourth in Thessaloniki with his partner Denys Denysenko, Plotnytskyi had to rush towards Plovdiv and make his mind switch to volleyball immediately. The talented outside attacker successfully combines both types. He and his partner Ilya Kovalov even won the silver medals at the 2014 U19 Beach Volleyball World Championship in Porto, Portugal, and that Oleh achieved alongside his duties at Lokomotiv Kharkiv.

The match that sky rocketed Plotnytskyi’s popularity was the semifinal at the U20 European Championship. Ukraine, down by 1 set to 2 against Italy, was trailing by two points at the end of the fourth set and by 8-13 in the tie-break when Plotnytskyi stepped into the service zone. His impressive service run stole the final place from the hands of the young Italians. This Ukrainian comeback remained as the performance of the tournament and guaranteed Plotnytskyi a place in the Euro dream team. He was also by far the best server in Bulgaria and ended as the top scorer of the overall campaign (including the qualifiers).

Athleticism, developed thanks to his passion to beach volleyball, strong and reliable jump serve, and attack diversity make Lokomotiv Kharkiv’s discovery a very solid player. Plotnytskyi stands at 194 cm at the moment and he might surely use a centimeter or two in size in the next years if he wants to continue with indoor volleyball. His reception is not bad, he is a beach volleyball player after all, but it is an element he would want to improve. He is a regular starter in Kharkiv, with a very much appreciated contribution for his team during the 1/8-finals of the 2016 Challenge Cup against Calcit Kamnik, and soon will come the day when he is recruited by a bigger team.