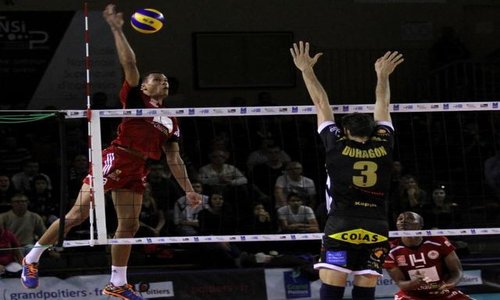 One of the two pleasant surprises in the French league this season came from the country’s eastern part. The small club Chaumont, coached by the experienced Italian volleyball “professor” Silvano Prandi (his Italian nickname), was among the title contenders throughout the entire campaign.

The French championship is one of the several worldwide where top players are recruited and it is often challenging for youngsters to shine. But it wasn’t quite the case in this year’s Silvano Prandi’s side. With a very interesting mixture between experience and some raw talent in their roster, Chaumont enjoyed probably the best season in the club’s history, having often been atop the regular season standings. Stephen Boyer, 19 throughout most of the campaign, turned 20 in April, attracted a lot of attention and had a major impact on Chaumont’s third-place in the regular season.

Boyer, whose full first name is Pierre Jean Stephen, started the 2015-2016 season as an outside attacker. He became Chaumont’s top scorer in the opening game away at Tours against the defending champions when he contributed with 21 points for the 3-1 win. Paris Volley, eventual title holders, succumbed in Chaumont in the next round when the youngster finished with 26 points and was switched to the opposite position in the third set, replacing the much more experienced Colombian Ronald Jimenez. Boyer never looked back, completed a record of 521 points overall and won the Best Scorer award with Poitiers’ Raydel Poey. Consistency has been key for the Frenchman as he finished his matches with impressive numbers most of the time.

The young man is a force to be reckoned with in attack. With his 194cm, he is not even very tall for volleyball standards but possesses fascinating athleticism. His jump is impressive, so are his attacks and serves. At the beginning of the year in Ligue A, Boyer showed that he can receive great as well and is altogether a very universal player.

It was no surprise that Laurent Tillie called up Boyer in the wide roster of the French national team for 2016.