Vettori: I believe in the moral values of volleyball 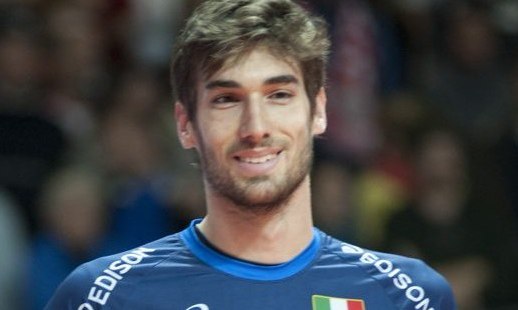 The 22-years old Luca Vettori turned out to be the good surprise in the team of the silver medalist from EuroVolley2013 –Italy.

In the end of the last season in Serie A1 in Italy Luca showed a big potential in the final games for the title in Italy, when his team Piacenza met on the court Trentino.

In Denmark Luca was chosen for best scorer and for the new season in Italy he most probably would be one of the leading figures in Piacenza.

„They say I owe my sports talent to my grandfather who has won the title of Italy in the rugby during the 50-thies in the past century”.

Luca Vettori is not overpraising even now, when has received recognition for being one of the bests in EuroVolley2013.

“I haven’t thought that much for the individual statistics till the tournament was on. “

Luca talks humbly and without banal words. His thoughts are divided in this way: first for the “head”, and then for the “arm”.  “Yes, this is true, but in some parts”. Luca smiles when he is reminded that scorers like him don’t have to think, they just have to hit the ball stronger and stronger. “Maybe because of this they often have tried to change the position on which I am playing”.

The ironic Luca came to the national team after long reflections. Some years ago he  was considering of leaving the team, because of dedicating to his studying. “It’s true. Maybe I was thinking, that this sport takes something from me and stints my perspectives.  But then I made the right conclusions. I understood that this could be my new opportunity. My work could help me in something, that I would take up with in time”. Luca uses the word “work” but makes it clear: “To me the work has a positive sense. There are important values behind this word – like effort, sacrifice, dedication. This word has not a negative sense. But of course, this pleasure is different from the one that could give you reading a book. But in the end – it is all about the pleasure”.

The interest for Luca is getting bigger and bigger. And despite all this he is looking at it with an unbelieving gaze, when being reminded for the stats he left with his play. “ I didn’t know. It gives me pleasure, but I think that the roles should be divided. There is the human being on the one side, and on the other – the personage. And I think, that it is right for me to dispose with my image”.

Is he surprised by all this attention? “Just a little, because I wasn’t prepared for it. Am I surprised by what I achieved? Yes, I ‘d like to say yes. And in the same time I want to reply that this is something normal. And when I am using the word “normal”somebody could think that I am not appreciating the achieved things, but this is not true. I am really proud  of what happened in EuroVolley2013”.

Is he scared of what lies in front of him? “A little, but I am also very curious. I still don’t know what they would want from me in Piacenza and would they expect. I have to understand what they’d want me to do. I am convinced that I have wonderful teammates in Copra, who will help me a lot. But there is a little fear. But same happened in the national team. Because it is easier to go playing from the bench in the club team. But when you’re a titular in all the games, it is a bit different. You begin to think about different situations and the night before the game you hardly fall asleep.

Scorers shouldn’t think. “I thought a lot about this issue. When I was younger, the mistakes I made had big influence on me. I thought and thought about the moments. And then I began working a lot on myself. I saw that if I can do something during the week, why can not do it on Sunday during the match? Step by step I changed and I changed my behavior towards me. It was the same during the European Championship and it was a lot of fun at some moments. I am curious to see if it will be the same in my club. I wish…”

The studying in the Music Academy in Bologna is interrupted, but not left. “I see volleyball as a manner to do something different. But I still don’t know what exactly. I like writing…”. I talking. “I am a shy person. It wasn’t easy for me in the beginning in the National team, but then I relaxed and began making friendship with some of the teammates. I found many people, who I could talk to. Like, for example, Lanza and Zaytsev.  We’ve talked a lot with them and the other guys, and the topics are different – from music to why volleyball is not the most popular sport. I believe in the moral values in the volleyball and I really would like to help with something, so that I could help making it more and more popular.”