Vital Heynen: I want the best for my players, this is the only goal I have 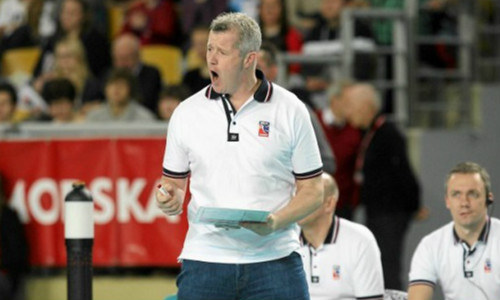 Vital Heynen – the coach who led Germany to the gold medals in the first European Games 2015 Baku, says that volleyball is his passion (and we couldn’t agree more with him having in mind that our motto is „Volleyball is our passion”! ).

This passion leads the Belgian ahead in his “volleyball jorney”but after spending 2 years in the Polish PlusLiga, coaching Bydgoszcz,  Heynen decided to go away.

In this interview you could read a lot about his impressions on Polish volleyball, is he thinking of coaching women’s team and what is his biggest goal.

–          At the press conference before season 2014/2015 you said that your new squad will be similar to the A Team. Did it really happen this way during the season?

Vital Heynen: I think,yes. We took couple of guys that were not realy famous, but some people said that they are really good. I think that before the season we had two players playing in their national teams and after the season there were seven or maybe even nine who had joined their respective national teams. We were able to bring a lot of guys who were not so famous and we finished on a good position in the PlusLiga. I’ve got the example of Steven Marshall, who is playing in the starting six of Canadian national team a lot of times, of Marcin Waliński – he is for first time in the national team of Poland or Konstantin Cupkovic, who came back to the national team after a really good season in Bydgoszcz. I think we made a really positvie team and if you finish at fifth position in this really strong league, that means you’ve  made a good job.

– You said that you like players that are not very famous. Where did you find players like Steven Marshall and AJ Nally?

– By looking to  the whole world and talking to whole world. I’m not so unfamous and by speaking to many people. This helps you to find where good guys are playing. I am always wathging the big events, even if I don’t have a team to coach. I follow everything to see where good players are. I think Marshall and Nally are just examples of those quality guys who maybe wasn’t seen before.

-Was it hard for you to say goodbye in Bydgoszcz? Did you leave in Poland something that you will miss very much?

-Volleyball is amazing in Poland and I will miss it very much. In the beggining I had some problems to adapt and find my place in Bydgoszcz, but in the last couple of months I really loved to be there. Fantastic team, fantastic staff and president of club. I really liked to work there and it was a big pain for me having to leave, it was really hard to say goodbye. I’m  planning to have a winter off now.

–In your first season in PlusLiga you noted that there are a lot of things to correct in the organization of the league. Do you think that there is an improvement  or maybe there are is somethnig worse  organized after almost two years spent in Poland?

– I think Poland is improving. It’s better and better, people may be complaining about what is happening, but I can see more people in the matches, more interests for volleyball. Also referees are using challenge system and it makes their job really good. I see lots of improvments, couple of teams play on the highest level. In my eyes the next season PlusLiga will be the best league in the world, but this is only my personal opinion.

-There will be a lot of changes in Bydgoszcz before the start of the next season. If you were to stay, would you do the same?

– If I would to stay I would not change so much, but if I was a coach, who comes after me, I’d change a lot. I will try to explain it. If coach is the same for next season, it’s always good to work with the same players. But if there is a  new coach, even after the fantastic season he needs to change some things to avoid the comparing to the previous coach. I understand this tactic – the new coach needs new team.

-In the last season in Poland  there were many German players, was it helpful for you?

I want the best for my players, so I want that they go where they will earn the best money, in the best leagues with the best coaches and the best medical staff. That is what I want for my players, this is my only goal. I think Poland is really good place to be in, so I’m happy that they are playing in PlusLiga, but it’s not helpful for me. I think I’m in really good relations with my players, we talk a lot. I like German guys, it’s nice to work with them.

-Do you think that someday you will again  coach a club and  a national team at the same time?

– I don’t think about this as a work divided- as  coach in club and in national team. I want to do what I like and I like to coach. In future I will surely combine some things, because sitting so long in home doesn’t suit me well, it’s not for me. I don’t know how will I combine things, I am  always joking that one day I will train the women team, then I am joking that I want to train beach volleyball. I like to be in trainigns, with ball, a ball for a volleyball, it doesn’t matter what kind of court. I will keep on doing that because it’s my passion and it’s my life.

-Do you watch World League matches? If so, do you have some favorites?

-I think the USA are playing really good, they get some new nice players. Also Poland is playing very well, they lost some important players but are still representing high level. Kurek is doing great job on opposite, Bieniek is not a surprise for me, I knew that he is really talented player. I think that if we will put second Russian team in World League, they will play better than the first one, because this season Russia was really dissapointing.