Wytze Kooistra found a new employer! He stays in Poland 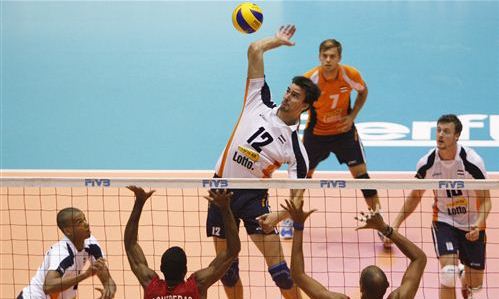 A Dutch middle-blocker, Wytze Kooistra, has finally found a new work place. Despite two not successful years in Skra Belchatow, he persuaded dignitaries of the newest member of PlusLiga , Czarni Radom, to sign a contract and remains in Poland for another season.

At the tournament of “Hubert Wagner’s Memorial” played in Plock (Poland), Robert Prygiel, the head-coach of Czarni Radom and ex Polish National Team opposite, has negotiated with Kooistra, but not in vain. The 209-cm tall player appended signature under the contract with Czarni Radom, where probably will appear on the position no. 4 as the opposite.

Kooistra has already played PlusLiga since two season in the jersey of PGE Skra Belchatow, but he did not go up in Jacek Nawrocki’s (head-coach) estimation and lost an internal rivalry with Daniel Plinski, Marcin Mozdzonek, and Karol Klos. Last season, he played 74 sets, scored 171 points, adding 36 blocks and 15 aces.

It is worth reminding, Czarni booked an opposite of France Marien Moreau, however, he sustained very serious  injury of his shoulder during preparation for the European Championships and he will not be able to play for a few months. As a result, the Polish club cancelled the signed contract.