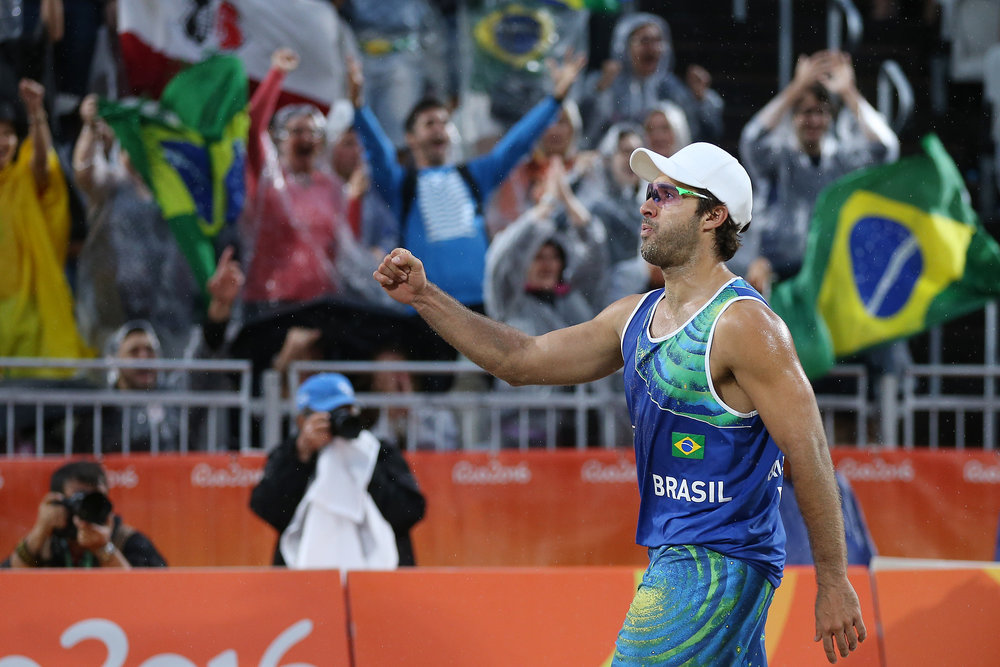 Newly crowned Olympic champion, Bruno Oscar Schmidt was elected as the Most Outstanding Player of the 2016 international beach volleyball season. The Brazilian takes the honour for a second time in a row, completing another splendid campaign.

In a season that started unusually early at the end of 2015, Bruno and his teammate Alison did not compete on the international stage too much and focused all of their efforts into performing well at home in Rio de Janeiro during the 2016 Olympics. It paid off in the end, as it turned out. Alison-Bruno won the most important events in the game since 2015, including the Beach Volleyball World Championship in the Netherlands, this year’s Olympics, and back-to-back World Tour Finals (in Fort Lauderdale, USA, in 2015 and in Toronto, Canada, three months ago). The two Brazilians also won the Vitoria Open and the Porec Major but the number of international events they missed in 2016 did not bring them a high finish in the ultimate World Tour ranking.

The 2016 Tour was won by Samoilovs-Smedins. This is the third beach volleyball crown for the Latvians who won the Tour back in 2013 and 2014, only to be interrupted by the spectacular Alison-Bruno in 2015. The Europeans, although not extremely consistent throughout the entire season, gathered the most points in the end. They won the gold at the Antalya Open, the Olsztyn Grand Slam, and the Klagenfurt Major. Only Janis Smedins was awarded at the end of the season, however, by grabbing the Best Offensive Player accolade (for the second time in his career, the first was in 2013).

Despite the second-place finish in the 2016 World Tour, Phil Dalhausser and Nick Lucena enjoyed a great season. The college friends only teamed up midway through 2015 and faced a race against time to qualify for the Olympic Games. However, they made it to Copacabana where they reached the quarterfinals and only lost out to eventual winners Alison-Bruno. The veterans were, in my opinion, the most consistent team this campaign, regularly performing well and having only stayed outside the top 8 at the Moscow Grand Slam. The Americans won the Puerto Vallarta Open in 2015, then the Maceio and Fuzhou Opens, plus the Hamburg Major. They remained with silver at the Doha Open, Gstaad Major, and the Long Beach Grand Slam.

Phil Dalhausser was awarded as the Best Setter for the third time in a row and seventh in the past eight years, making it pretty much his “own” discipline.

Piotr Kantor was named the Most Improved Player, following the amazing season of the Polish tandem Losiak-Kantor. They finished third in the Tour, scored some very impressive wins, and stepped on the podium on four occasions. Losiak-Kantor, with a room full of medals from age-group World Championships, won the Rio de Janeiro Grand Slam in a great fashion and will be a team to follow in the years to come.

2016 also showed us the Brazilian beach volleyball future. Both 23, Saymon Barbosa and Gustavo “Guto” Carvalhaes entered the international stage with a scream and left a bright mark. The youngsters won the Cincinnati Open in the USA, lost the gold medal match at the Klagenfurt Major, and added two bronze-medal finishes at the Olsztyn Grand Slam and the Maceio Open. A set of results considered remarkable by all specialists. In fact, the Brazilians stayed outside the top 10 at an event only twice (out of eleven attempts) in the last season. This is why the Top Rookie award granted to the energetic and technically gifted defender Guto should not come as a surprise to you.