10 Things You Learn About Life By Playing Volleyball 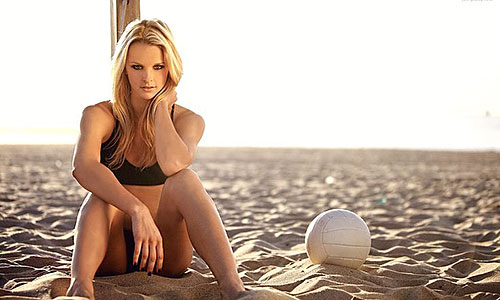 I am 100% positive I hit that ball angle inside the block, while facing line, with horrific bangs, skinny legs and giant volleyball knee pads. 100%.

What started off as an effort to mock the listicle (a short-form of writing that uses a list as its thematic structure), blossomed into the fruits of my volleyball career slash psychology degrees slash six years experience as a mom. You can hate it or you can love it, but I’m not looking over at the bench on this one. In no particular order here are 10 things you learn by playing volleyball:

1. Clean Aces are Money – There are times in life that you get an ace. No one is ready for what you have coming and you get a point – just like that. You may get a string of aces or you may just get one or two in a match, but when the opportunity arises take it, be thankful and let that point to propel you to your next rally. You may not get one again for a while, so strike while the iron is hot.

2. Hit Hard, Watch Good Things Happen – I stole this from my husband, but he’s right. Hit the ball. Stop being afraid to swing – hard. You might not be able to power through a three-man block on a low set inside, but it’s gonna sound good no matter the outcome. Swing away.

3. Life is All About Angles – I got a boat load of kills and broke school and national records hitting two shots: angle and more angle. Life is about angles. Not everything you encounter will be cut and dry. Not every path is marked off. You’re gonna hit some rocky terrain or stumble across sudden turns and forks in the road; the better you are at adapting to all the angles, the better off you will be.

4. Still Sometimes You Gotta Hit Line – I can barely even say the words “hit line” but sometimes it must be done. Sometimes you have to go against the sure thing and hit line. That middle is too big, that ball is too low, everything is all wrong. Square your shoulders and hit the freaking line. And you better hit it hard, because if anyone gets a hand on it’s going to end up back in your face. The least you can do is take a pinky off the right side blocker if you don’t get a clean shot and it’s a kill all the same. Are we done talking about line yet?

5. Swing at Everything – Whether you hit it out or got blocked or kept the volleyball ball in play, at least you went down swinging. I embarrassed myself many times swinging at sets that I couldn’t hit, but that’s what eventually made me a good hitter. You have to be willing to take a chance and take a swing. In life or on the court, you’ll never know what you are capable of if you don’t take a swing.

6. Good Blocks End Plays – Boundaries are good for us. In volleyball, blockers are the first line of defense. Good blocks end plays and even touches take the heat off the ball. In life, relationships, work – you need boundaries. You need to be able to block out the toxic stuff in your life. You’re ability to say “yes” to the things that will make you thrive and “no” to the things that will drag you down can determine your success in so many ways. Remember, even the touches take the heat off the volleyball ball.

7. Watch the Setter – Being a great observer will get you everywhere. When you watch the setter, she gives you cues on where the ball is going. Outside, middle, over on two. When you observe in life you get cues on your next play. Watch everything. Track nuances. Read emotions and non-verbals. Learn to be an observer and act on what you see.

8. Don’t look at the bench – Unless you want to end up there, don’t look over there. Especially after a mistake. In my early years of playing, I spent most of my time on the bench. When I did go in, I was always nervous about making mistakes. For the most part, every time I made a mistake I was taken out. I made a lot of mistakes, so…I spent a lot of time on the bench. I carried this fear with me to my freshman year of college. In my first collegiate match, I missed a swing or something and immediately looked over at the bench. After a couple times doing this, my coach called a time out, pulled me aside and said to me “look, I’m not going to pull you out over one or two mistakes, so you can just stop looking over here expecting to be taken out.” And that was it. I never looked back over at the bench again. The confidence to trust myself and trust that my coaches knew what they were doing, even after I made a mistake, was huge – huge.

9. Losing Builds Character – Yeah, yeah, yeah. Whatever. Most of the time it just fuels the fire to win and sometimes it even makes you cry. This is true in work and in relationships. Losing builds character, but it totally sucks. Everyone has to endure a few losses, it’s just part of the game. Learn from it and move on.

10. Winning Feels Amazing – All wins feel amazing. I’ll take an ugly “w” over any loss any day of the week. In the famous words of Ignacio (Nacho Libre) – “I want to WIN!”