7 Ultimate Reasons Why to Date a Volleyball Girl 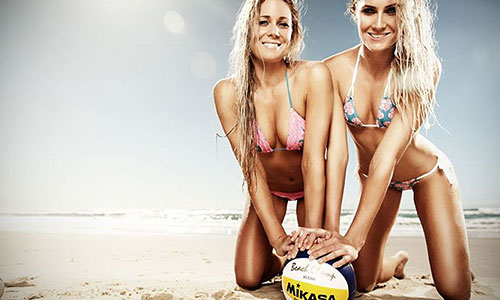 Why are volleyball players great partners? Here is our ultimate list of reasons why to date volleyball girl.

1. She knows when to turn off being a bitch
This is the best trait volleyball players have, and the number one reason why you should date them. It’s no secret that when you put a lot of girls together for long periods of time — whether it be full-weekend tournaments, bus rides or two-a-day practices — they will fight and gossip. But volleyball players have an ability to get along when it truly matters.
You could hate the girl next to you, but the moment you get on the court, every problem you two have is forgotten (until you come out with a win).When it comes to relationships, this is an important trait to possess. She knows what fights to have, when to have them and when to keep her cool.
2. She’s willing to learn
Like any athlete, she isn’t just born great. It takes practice to memorize plays and master skills like foot work, ball control and transitioning. You need to know when to take the ball with your hands instead of forearms. You need to know what hitter to set to if one of your hitters is having a bad day. Strategy is always required. In relationships, she’s going to patient with you.
She knows the importance of watching, learning and adjusting. She will learn from you and will make the proper adjustments. Like a team, you both want a successful relationship, and the only way to accomplish that is by learning from each other.
3. She is resilient
Unlike other sports, once a team gets too far ahead, it’s hopeless to keep trying.I admire those players who are down 5-1 with two minutes remaining and still give it their all, but volleyball is a different type of sport.In the matter of five minutes, the tables can turn entirely in your favor. A score of 24-17 can turn into 24-24 if you don’t mess up.This means she will never give up on you, even when things aren’t perfect. She’ll work through problems and will give it her all.
4. She’s tough
She’s probably been hit in the face by one of the top college volleyball players in the state, gotten a bloody nose or a minor concussion at some point in her playing career. But, those kinds of situations define your character.No matter what happens on the court, you can’t whine about it. You have to do your best to shake it off and keep going.Volleyball players know they are tough, and they are trained to get right back up after every fall. It’s in their character.
When you two have a disagreement, she will always handle herself with grace and poise. She will also be there to remind you to get back up if you have fallen.
5. She’s fearless
When you are down against a team you shouldn’t be losing against, you are willing to sacrifice everything to change your coach’s disappointed expression and avoid the possibility of losing. You sacrifice your body for every point, and as long as you come out with a win, you don’t care if the result is injury.
You dive into those chairs, and you bang into those bleachers. This means you aren’t going to make her nervous. She’s dealt with many physically and mentally terrifying things in her life. She will make you do things you might fear, but it will lead to a lifetime of adventures.
6. She’s a team player
Team chemistry is the key to success in volleyball. Pasta parties and girls’ nights are taken seriously, and she will always pick her teammates over you. Accept that, but also know she will respect your values, too.
She won’t question if you need a boys’ night, and she won’t text you on your night out, asking what you’re doing and who you’re talking to. She’ll leave you be because she understands the importance of relationships outside of your relationship, and she will always respect those lines and the people who are important to you.
7. She’s forgiving
In volleyball, you need others in order to succeed. You can have the best player in the world on the court, but it won’t matter if the team isn’t in it together. Together you win, and together you lose. So, if it’s at game point, and one of your teammates blows it, leaving the score 25-23, you can’t be mad at her.You forgive, and you try for the next game. A point is never on the individual. Rather, a team point is earned or lost.In relationships, she will forgive you, she won’t hold things against you and she understands no one is perfect.
If the tight spandex, cute bikinis and flexibility aren’t reasons enough to date her, her personal characteristics make her a great potential girlfriend.