The Blog of the Volleyball Lover: Who is Mr.Volleyball from Bulgaria? 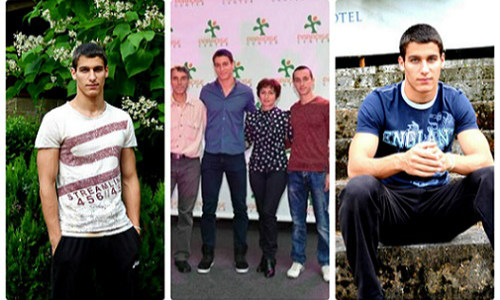 The middle blocker of  Teteven Volley and the Bulgarian youth national team about the dreams, success, family and… what is more important: intelligence or beauty?

So, guys, I am more than happy to have my second blog post just two days after I have announced the blog:)).

I know I’ve promised you to hear from me back this Saturday but surprisingly (in a very positive way!) I was contacted by a Bulgarian girl who kindly asked me if it is possible to have a post about Mr. Bulgarian Volleyball Gordan Lyutskanov… and if it was possible to post it on Monday…

Firstly I wanted to save it to Saturday but it results that the young Bulgarian volleyball player has today his… Birthday!

So, as a matter of fact, this article is the gift from Malinka Dimitrova to Mr. Bulgarian Volleyball.    And  I am sure he will be well surprised (although I do not know him personally).  Because the story in the article might be only about how a guy started to play volleyball and turned out to be successful. But the story of the post is about how good friends want to wish you Happy Birthday and shout it loudly all over the world!

Good friends that met you thanks to volleyball – because Malinka and Gordan met thanks to the volleyball.

So Happy Birthday, Gordan! You are a lucky guy having such friends!

Now, let’s see Who Mr.Volleyball from Bulgaria is :))

Gordan Lyutskanov started to practice volleyball 7 years ago. In the beginning he had competed for the team from Yablanitsa ”Izgrev”, but afterward he decided to transfer to Teteven – a small Bulgarian town where volleyball was just born. And it resulted this to be the right choice for him.

Volleyball became his passion and his job. He was willing to sacrifice many things in order to achieve his dreams. He’s born on 11th of April 1997 and he is a Bulgarian volleyball future star – last year in July 2015 he won the silver medal after hard five-set fighting against team Serbia at the Balkan competition in Cetine, Montenegro. The U19 team won bronze medal at the European Youth Festival in Tbilisi, Georgia, too.

Nowadays the adolescents surprise us frequently. Definitely not in the best way. But this boy with whom I happen to spend time and who I know, is an exclusion. One proverb says: “Ineach herd there is a black sheep.” In this case, the metaphor has a figurative meaning – this young man has achieved something in his life, abides by the values. He is a down-to-earth boy – to him beauty and talent are just a little part of the preconditions to success. According to him intelligence and the belief in our own power make the victory possible.

The questions I made to him were prepared beforehand. Turns 19 years today, 2 years ago he became a part of the youth national team of Bulgaria, he thinks that sport must be the most important thing in the life of the young people.

As are the understanding and teamwork in the club team. “Above all we are friends, and then – colleagues. We have a lot of fun”, he said to me in answer of the question: how do his teammates recognize his successes.

We talk about the other good thing, that happened to him recently – the winning in the “Mr. BgVolleyball” contest (contest in Bulgaria about the best looking volleyball players). In this several-months competitive battle, he hasn’t only win but also showed to himself  that the key quality is self-appreciation, but it is not something that has to reflect on your daily personal life. “I don’t notice a change in my life. Yes, I have more acquaintances and supporters, but the number of my friends is the same”, the young volleyball player avows in answer to my question about eventual change regarding the number the friends.

The boy from the “halva” town (halva is a typical Bulgarian sweet)  has simple, purely human wishes – he wants only health and happiness for himself and his family. His brother Yohan is studying in UNWE and training volleyball, too – but it’s in the amateur team in their hometown. Their parents Reni and Yuliyan Lyutskanovi support every their initiatives, that’s why Gordan says in other interview “behind every successful athlete there are his parents”. He’s got an enviable ambition and typically for Aries, he is unstoppable in achieving his aims: “I’m sure that what I’m taking up – I give my best to get an optimal result. To achieve anything in your life, you have to make some efforts at first.”

In his opinion money isn’t the most important thing – perhaps because of his young age, or just because the glory hasn’t change him – I don’t know but he avows that he would give many money only for viewing world landmarks. Hecansacrifice many things in the name of the dreams. The sport activities help Gordan become more responsible, more persistent and demanding to himself. “I really want this to be in the right way – I’m trying and I’m giving my best. It’s my pleasure to play in club like Teteven Volley. And playing in the youth national team is a great honor and pride for me. I say it one more time – the talent is only 1 %, the hard working and stability are the rest.”  2015 brought him and his teammates some awards. In result of that the sports journalists voted that they are “The best youth team”.

He doesn’t bother to talk about everything, even about things regarding his privacy. For example how was born the love of sport, his childhood, the changes and etc. “The love of sport …maybe it came in a natural way. My father has graduated NSA (National Sports Academy). Since we were toddlers he was teaching us that SPORT=HEALTH. I have tried everything – running, swimming, football, handball… But I felt in love with volleyball. It’s my real passion.”

The memories from his childhood make him smile, his voice changes when he’s talking about this topic: “I’ve got so many funny memories from my childhood. Me and my family remember these and laugh so much. My brother, whose opinion I’m really appreciating, is very persistent, efficient, exacting and precise. However, I used to do everything possible, in order to I have more time for playing.” And although they both look alike (the age difference between them is only 3 years), they’ve got some differences in the personalities.

Despite of his young age, Gordan has already formed himself as a personality and has a firm stand on quite topics. Probably martial arts activities before volleyball had influenced. “I like martial arts which teach discipline, respect, patience and balance. But one day I had to choose between both sports. The scales have tilted more toward volleyball. I declared that I won’t practice other sports and I started out only with it.” His choice hadn’t been so easy. Many of us are giving up in similar dilemmas, or taking unconsciously selected road – not bringing happiness and satisfaction.

Gordan is doing well with the lessons, too – his busy life and various activities don’t interfere on that. This year our hero is graduating from a foreign language school with English and Spanish, and in his future plans the sport is still №1. “It’s really hard, but I give my best in studying. I’m respecting my teachers and thank them for compromises they devise to me.

I’m considering  keeping on progress in sports field. The sport academy is a good alternative.”

I asked him what is his opinion the beauty and intelligence – if the combination of the both qualities help him in life. I’m expecting to get “yes” as an answer, but it’s completely different: “The beauty is a subjective concept. I’m not that kind of people who are exalting from it. However, it’s good but if don’t have the intellect – I don’t think that you can get anything done. Since I was toddler my parents have taught me to work hard for things which I want. So, victories aren’t effortless.” That capacity has impressed me – and it’s the reason for me to choose Gordan’s story – a perspective Bulgarian volleyball player. The glory and successes not change you and being just a human. A point that have transformed in a bad way in many of his colleagues.

He identifies himself as an ordinary young man. “Yes, I’m lucky – I’ve got wonderful family, real friends and good teammates. But I don’t think that Gordan Lyutskanov out of the volleyball court isn’t so different than most of the young men. I like having fun with friends – as every 19-years old.” However, there is a little difference – having fun in his mind  doesn’t include an alcohol abusing and prohibited substances.

He accepts with mature everything in his life – the good and the bad. He’s looking at the future with optimism, which is extraneous for his contemporaries. “I do not regret for anything. Life is ahead of me. I wish to myself being healthy – all other things can be achieved.”

His idols in sports, maybe in life too, are the players from Bulgarian national team – their achievements inspire everybody who loves volley. “I admire our volleyball team. They deserve to be on the top. I wish them success!!!” Maybe one day Gordan will be among these heroic men …who knows…

The sport activities are an inseparable part of Mr. BgVolleyball’s life. It’s hard for him to imagine the daily routine without it. “I hadn’t thought about that. Without sports!? Definitely it should be something that bring joy to me. However, there is a moment in life when you can’t rely on your sport career, you must think about other things.”

I believe in his progress and potentialities, and I know that whatever he’s meeting with, it will be successful.

He’s trying to be helpful to youngers, even with an advice. Leading role is bonded to the persistence and confidence – this formula had developed to him. “I would recommend to the kids: to be efficient and stable, whatever sports activity they take up. To believe in themselves. And even if they’re having difficulties – don’t give up. The hardworking always rewards.”

In their free time Gordan and his classmates take a part in charity initiatives. Because the Good doesn’t need a special day to be done. It’s important to have a heart for everything in your life.

Here it’s  Gordan’s  quatrain which describes his love for the volleyball:

What is volleyball for me?

This is the great-greatest game.

At the end of our conversation I got unexpected question from my interlocutor. I was surprised, but I had to put myself in the place of the other side. The topic which in Gordan was being interested, was my choice of education, and respectively – of career. “And you – why did you decide to work this, is it your dream? Did you think that you’re meeting so many different people – to understand them, to love sport so much?” (Malinka is Bulgarian sports journalist).

I hadn’t an answer for the both questions, but I knew the reasons to my choice, and to the other thing – the love for sports.

Well…I suppose this is why we all love volleyball..Because it’s more than just a sport…it’s a passion.

Because I really really really want to share stories like this. I do believe (and I know you do also) that volleyball have many good examples which deserve to be talked about.

See you on Saturday, Volleyball Lovers!