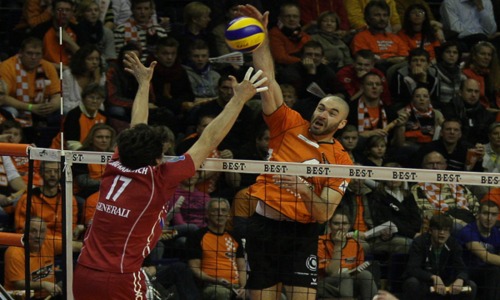 The new Bundesliga 2013-2014 season is setting in this week after another long summer session. This year’s campaign will see back-to-back champions of Berlin Recycling Volleys play their first home game on Tuesday against Generali Unterhaching.

There has been a lot going on this summer with Berlin’s main title contenders. It couldn’t be otherwise as the goal of both Friedrichshafen and Haching is to interrupt the new order established by Mark Lebedew and his lads. While Berlin kept its main roster for a second consecutive year, relying on pretty much the same league of heroes who ruled the domestic championship twice already, the Romanian-born specialists Stelian Moculescu and Mihai Paduretu had to face polar realities. Still, the Bundesliga hasn’t changed much. We are expecting the big three to remain alert and distribute the medal positions and the European Club quotas, but we will be curious to see whether teams like TV Ingersoll Buhl are going to narrow the margin and challenge the favourites even more than they did last year.

The Australian head coach of the league winners Mark Lebedew doesn’t need the change his roster dramatically when he has brought two consecutive title to the German capital. He only let go of the outside attacker Bjorn Hoehne, who was transferred to the emerging TV Ingersoll Buhl. The young Ruben Schott (19) has arrived as a replacement and as someone yet to gain senior volleyball experience. The only serious change Lebedew made has been the signing of the talented Serbian international Srecko Lisinac (2013 CEV VELUX European Championship’s Best Blocker). With him on the list, Berlin Recycling Volleys are in possession of four potential starters, which might be useful as the season goes further.

Most of the attention throughout this transfer session has been caught by Stelian Moculescu and his decisions. Following his scandals in last year’s final series, due to disagreement with match officials, and the runner-up finish that left VfB away from the title for a second year in a row, we can be sure that Moculescu has done some serious thinking about how to make his side stronger. The names he has recruited mean only thing – Friedrichshafen will challenge Berlin for the title this year! Moculescu has chosen Bulgarian and French players mostly to help him achieve the ultimate goal of dethroning Berlin Recycling Volleys. Two members of the Bulgarian national team, fourth in all major national teams tournaments since 2012, including the London Olympics and the recent EuroVolley, are going to accompany Max Gunthor in the middle. Viktor Yosifov, 2009 European Championship’s Best Blocker, was the most efficient player at his position in the Italian Serie A last year, whereas Svetoslav Gotsev gained his debut international volleyball experience during the past season competing for another Italian team Marmi Lanza Verona. Gotsev will be probably benched at first at the Bodensee, but you will surely have the chance to see his fast hand in action. The Serbian libero Nikola Rosic left to join the Champions League Swiss debutant Energy Investments Lugano, but his replacement is even more impressive – one of the best liberos in modern volleyball, the French Jenia Grebennikov. Another Frenchman has been signed to partner the attacker and struggling receiver Valentin Bratoev. Baptiste Geiler, quite a versatile receiver and a spiker, will add many technical skills to the squad. A change in the setter’s position gives the Serbian Nikola Jovovic the number one status. The Slovakian Juraj Zatko has joined the Polish AZS Politechnika Warszawska and now Jovovic will enjoy more game minutes. As someone who criticized Jovovic often for his inaccuracy during the last campaign, I should say that the young Serbian grew significantly ever since. Jovovic had a blast during the 2013 EuroVolley, where he won bronze, and was overall one of the most varied playmakers. Should he continue his growth under the influence of the hard to please Moculescu, VfB will finally have a great setter, which might get them a step closer to the desired title.

Last, but certainly not least, Unterhaching’s captain Christian Duennes joined Friedrichshafen. It is still a mystery at which position Duennes is going to be exploited. We’ve seen him perform as an opposite and a middle blocker when necessary, but none of these options will give him a starting position now. The veteran Ventzislav Simeonov was the league’s best opposite and point scorer last year and should be granted a regular position unless injuries appear. It is nevertheless great to have a convertible fighter like Duennes in your squad, for you will never know when you will need him. 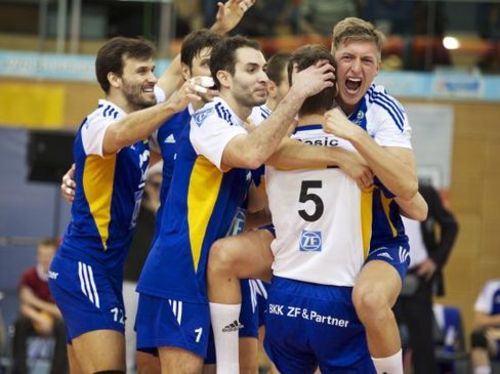 The Bavarian management board are dealing with a lot of problems on their own. The team will lose its main sponsor “Generali” at the end of the season. Changes are already happening as they had to release most of their more expensive players. German youngsters and some promising players have been recruited in an attempt to preserve Mihai Paduretu’s high ambitions. Patrick Steuerwald joined Tonno Callipo Vibo Valentia in Italy, whereas Branislav Skladany and Alexander Shafranovich signed with the French Nantes Reze. Robert Hupka moved to the Czech Republic to play for Jihostroj Ceske Budejovice. For a second year in a row the team captain left to reinforce VfB Friedrichshafen. Last year it was Max Gunthor, this year Christian Duennes. The libero Sebastian Pruessener and the middle blocker Matias Raymaekers are no longer with the team either.

With his back set against the wall, Paduretu had to approve the newcomers. One of the world’s best young setters arrived in Munich. Tsimafei Zhukouski has some valuable experience playing abroad for his 23 years, he is expected to move things forward for the club in these difficult times. With some interesting matches for the European League in his CV, the Israeli Genadi Sokolov also found himself packing for the plane to Munich. Two perspective German cadres will have a chance to get some Bundesliga taste with Unterhaching, namely the setter Philipp Jankowski and the outside attacker Jan-Philipp Marks. Luckily, Paduretu will enjoy the presence of three national team stars, Marcus Boehme, Sebastian Schwarz, Ferdinand Tille, who, alongside the Finn international Kosti Shumov, who remains for another year in Haching, will maintain his high ambitions. Tom Strohbach and Simon Hirsch, two boys who have been patiently waiting for their chance to get in the first squad, will finally have the possibility to be starters. However, if there is a problem that should concern Paduretu, it is the lack of a back-up opposite. During the friendly with Jihostroj Ceske Budejovice (played in Munich last week, 4-1 overall after two additional sets) several players were rotated on the opposite position as an eventual alternative to Hirsch, but I still don’t see who can be chosen for the role. A remark should be made that Boehme has been tested earlier in his career as an opposite (including some games in his club in Italy), but the lack of a clear option might raise future discussions.

Unlike last years, we are going to offer you a preview of one other team that is perhaps an underdog compared to the big three. Not only has the Argentinian head coach Ruben Wolochin made a great progress with his team, but TV Ingersoll Buhl took the fourth semifinal spot at the end of last year’s campaign. Wolochin’s work, the several prestigious wins and this year’s roster deserve more media attention. They got ours, to start with. It would be a surprise if any team upsets the three-way Bundesliga battle, but I believe, if this actually happens, Buhl will have the brightest of chances. With a team full of relatively unknown names to the massive audience, Wolochin gathered a group of players not to be underestimated. The duo Axel Jacobsen – Marvin Prolingheuer remains for another year. Many changes occurred at position four where Bjorn Hoehne arrived from Berlin. Two other interesting receivers are the Estonian Martti Juhkami, notable for his great attack efficiency, and the Pole Lukasz Szarek. One of the most talented middle blockers in Europe, another Estonian – Andri Aganits, will also play in the Bundesliga as he left his former club Selver Tallinn.