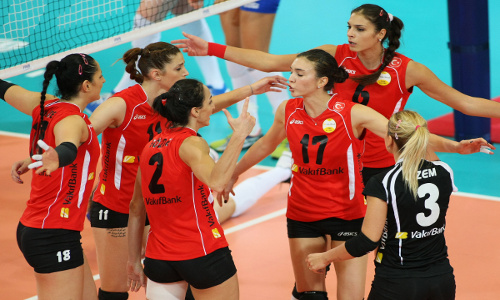 Volero’s Kenia Carcaces was quickly into her spiking rhythm and contributed three points as the hosts took an 8-7 lead at the first technical timeout. Carcaces and teammate Mira Golubovic continued to try and smash their way through the Chinese defence, but Guangdong Evergrande always defend well and turned the tables with an ace from captain Ruoqi Hui at 16-14. Lang Ping’s squad kept a two-point lead until 23-21. However, momentum changed again with Golubovic serving an ace to offer Zurich a first set ball at 24-23. Yunli Xu saved one but could not prevent Carcaces from smashing the first set home for the hosts.

Good serves allowed the Chinese to take a slight lead before Natasa Osmokrovic delivered a clever shot to even the scores at 11-11. 19-year young Laura Unternaehrer served successive shots as Switzerland moved into a 15-11 lead, but Ting Zhu slugged Guangdong back into the match and it remained tight to 18-18 when China opened up a two-point gap. Zurich coach Jan de Brandt called a timeout but it did not help. A Carcaces fault gave the Asians a chance of taking the set and Zhu concluded by hammering the Mikasa down to make it 1-1.

Spikes from Carcaces and opposite Olesia Rykhliuk helped Volero Zurich move into a 11-8 lead in the third set but China were quickly back in the game. Setter Shen served two aces to lead Evergrande to a two-point lead at the second technical break. The Asian champions were successful at the net and that helped them into a five-point lead at 22-17. Volero showed glimpses of their attacking form but the gap was too big to close against the resilient Chinese. A Zhu missile finished things off.

Sunday’s bronze medal match featured a tough battle between the two key players: Ting Zhu (19 points in the first three sets) and Kenia Carcaces (21) led their teams with sparkling offensive game and exemplary fighting spirit. Volero experienced the better start into the fourth set but Guangdong bounced back after a four-point deficit and regained momentum at the second technical break (16-14). Zhu came up with another rocket and a service winner by Yunli Xu put China 23-20 ahead. Guangdong Evergrande got match point with another ace by Xu and Zhu, again, sent down the winning shot to earn the Asians the bronze medal.

Sarah Pavan and Carol got in a couple of smashes and a nice tipover early on but Turkey’s Jovana Brakocevic responded with some good shots of her own, but there was little to separate the two teams in the first stages of the opening set. A kill by captain Kirdar Sonsirma Gözde put Vakifbank Istanbul two points up at the second technical timeout. A quick Brazilian combination helped Unilever to reduce the gap to one point at 22-23 but it was already too late. At 24-23, Brakocevic brought up set point with a blistering winner from the right wing. The South Americans then failed to deal with another Brakocevic hammer and the Europeans were 1-0 up in the match.

Showing no sign of fatigue after a tough tournament, Istanbul roared ahead 10-6 in the second set, igniting a party atmosphere among the Turkish fans wearing red and black. Brazil coach Bernardinho called a timeout and Unilever soon smashed their way back into the set, inching to within one point at 15-16. However, it did not last, Turkey edging back in front with setter Naz serving two winners to make it 18-15. The roller-coaster ride continued with strong Brazilian defense and the Bernardinho team firing back. Brakocevic and her teammates kept calm and when Gabi missed wide, the European champions had their first set point. They needed three attempts to eventually prevail with Sarah Pavan’s shot landing some centimetres behind the baseline.

Gözde and Fürst each showed their power to move the score on to 8-4 for Vakifbank Istanbul early in the third set. Desperate to stay alive in the final, Brankica Mihajlovic finally penetrated the Turkish wall to narrow the gap to 7-9. Both teams set up quick attacks through the middle combined with powerful spikes from their outstanding opposites. Brakocevic smacked another winner to extend Turkey’s lead to 16-11 at the second technical timeout. Fürst’s monstrous hit made it 18-11, forcing Bernardinho to call his last timeout. Gabi retaliated for Brazil, yet there was no stopping Brakocevic’s relentless assault as Istanbul moved forward. Fittingly on match point, it was Brakocevic who soared high and launched a missile deep into Unilever’s back-court. Amanda stretched as far as she could, but her bump sailed farther behind her, and Turkey jumped for joy. The set was theirs at 25-16, and with it they had their first world title.