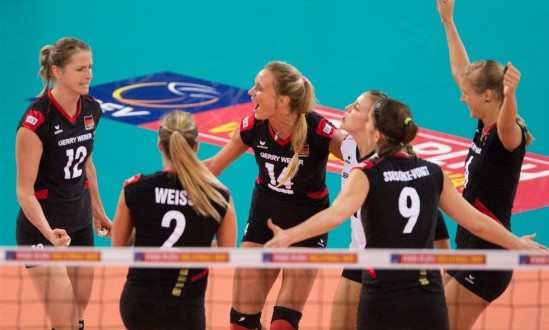 This is end of the marvellous dream of Croatia during Women’s EuroVolley 2013. Maja Poljak and rest was beaten by the hosts of Germany in three sets battle and finished off the tournament on the rank 5-8. On the other hand, the “Black Eagles”, led by another fantastic middle-blocker Christiane Furst, gained an access to Berlin for the Final Four. It is going to be the third row presence of Germany in the Medal Zone at European Championships.

In the first set, the strategy of the Croatian Team was easily found out after the first rallies. They tried so set Heike Beier under pressure who offered problems with her reception in the past games. An early 0-2 residue turned the Girls from Giovanni Guidetti with a three point run, opened by Corina Ssuschke-Voigt (3-2). After a nervous beginning, the German Team set the pace with captain Margareta Kozuch (7 points) and went up to 17-13. But it was not the preliminary decision while Samantha Fabris (6 points) attacks a porous defense of the Germans and gained a 22-20 lead for Croatia. The 6.600 fans saw a thrilling final phase which was ended by a German comeback (5-1) and an unforced error from Mia Jerkov at 25-23.

Germany managed the better start in the second set and led up with four points at the first technical time-out (8-4). Especially the German wing-spikers Margaretha Kozuch and Maren Brinker set every ball on the ground and found every lag in the Croatian block at this time. After their weak start, Heike Beier increased their gameplay in the second set too and took on a five point advantage with a block at 16-11. Croatia tried to fire back with Samantha Fabris but they were not able to compensate the bad team performance in the defense with only 36% successful receptions. However the advantage was enough to conclude also the second set with 25-23, after the Germans missed five set balls at 24-18.

In the third set Germany got off an outclass beginning and raised the scoreboard to 5-1. But from now Croatia found a way back to their top form in service and presented Germany with problems in reception. Again Samantha Fabris reduced the result to 15-16. It seemed that the Croatian Team had the chance to win the set, but the German Girls were borne by an amazing crowd and flew to seven match points at 24-17. It was Christiane Fürst who decided the match with a duel at the net, to clinch the ticket for Berlin.