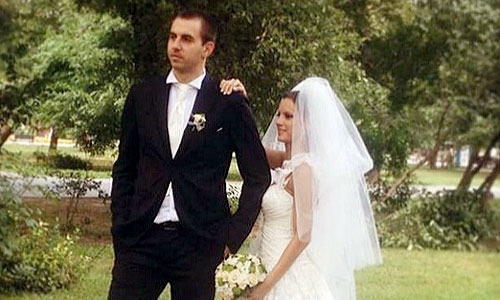 The setter of the Bulgarian national team- Georgi Bratoev just got married! Bratoev married his long-time girlfriend Plamena Peeva on a stylish ceremony, which was held in the capital of Bulgaria- Sofia, on Saturday.

The two in love firstly married in the chursh “St. Georgi” in the centre of the city.

Let us remind you that Georgi was chosen for best setter in FIVB World League 2012 and in the Olympics 2012. After receiving the first prize, Bratoev decided to make a proposal to Plamena. No surprises, she said yes. Because of all the competitions that Georgi has to take part in, Plamena had to organize the wedding all be herself. Ane she did it in an excellent way :)) Now that the Bulgarians have their two-weeks- rest between FIVB World League 2013 and their preparation for 2013 European Championship the couple decided to have the ceremony now.
The party after the official ceremony was held in a restaurant complex in Sofia. The 26 years old Bratoev chosed for his godgather his old friend – Ivo Damyanov, who Georgi played in Slavia Sofia with.
Almost all the players of the Bulgarian national team attended to the ceremony in the restaurant. One of the biggest world volleyball stars – Matey Kaziyski came especially for the ceremony in the church. And he was in the company of beautiful young lady.
Georgi and Plamena have 10 days for their honey moon, which they will spend in Dubai, OAE. The excursion to the exotic destination was a special gift from the Vice President of Bulgarian Volleyball Federation- Liubo Ganev.
But how did the love story between Georgi and Plamena start ?

Georgi and Plamena are together for many years and their story shows us that sometimes unexpected meetings could bring us to the most important things in life. Both met when Georgi was player of Slavia Sofia and Plamena was just a fan, supporting the team. From that moment on both are together, sharing ups and downs. Plamena was with Georgi by the time of his first work abroad- in 2010 in Tyumen, Russia.

The beautiful Plamena seems to be disappearing in the arms of Bratoev. She is a hearty girl and everytime she travels for the visits of the national team, she is always there – on the tribunes, cheering up.
The young couple still don’t have a personal home- they both live with the parents of Plamena.
We wish them many happy moments :))