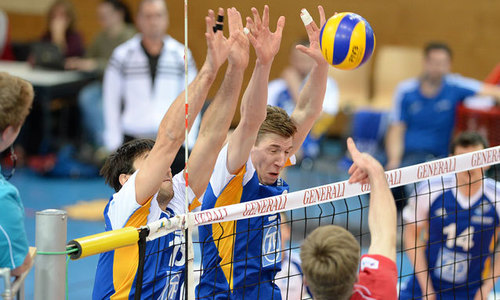 The second half of the regular season in the German Bundesliga did not commence a successful streak for the Oberbayern’s hottest volleyball place. The month of January caught the Generali-sponsored club fighting at two fronts and pretty much left them with only the playoffs to look forward to.

The situation with the team in the Munich area has long been reported uncertain in terms of future existence and financial guardianship. Leaving the economical and political matters aside, I should say that Haching is currently technically a little bit behind the two title favourites that made it to southern Germany this month. You are probably going to ask yourselves what has gone wrong since October when Paduretu’s lads looked just fine in Berlin and even took a tie-break win at Friedrichshafen. Well, I just think both title contenders have been gradually finding their rhythm, whereas Unterhaching seem to display the same weaknesses. First the back-to-back champions from Berlin Recycling Volleys arrived at the Generali-Arena and made very few mistakes throughout the game, leaving their hosts empty-handed. The feebleness of the “reds” looked gone this past Sunday against the interim leader Friedrichshafen. However, apart from the clearly dominant now-or-never third set, Haching failed to grab most of the opportunities they received. Scrutinizing the stats sheet, one would never find an actual reason for the problems of Bavarians. Attack, reception, block and serve (except Markus Boehme, who had a horrible serve day) looked just fine, but none of them helped Mihai Paduretu at the end of each of the three sets won by the guests. Another troublesome fact is that there is no consistent second outside hitter next to the controversial, but nevertheless useful captain Sebastian Schwarz. Jan-Philipp Marks, Ewoud Gommans and Tom Strohbach all took turns in appearing on court in the last days, but it seems like the issue is still out there to be faced. 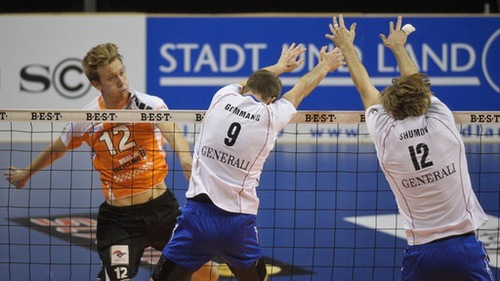 In between the two league derby games the Polish powerhouse Skra Belchatow shattered the hopes of an all-German Challenge Round in the CEV Cup. The 2012 Champions League finalists won a very important straight-set win at Generali-Arena, a victory marked, according to the Romanian-born head coach Mihai Paduretu, by some contestable referees’ decisions and tons of drama in all three sets. The result gave the necessary confidence to the Poles and they will eventually face another German side, Friedrichshafen, in the Challenge Round after a hard-fought 3-2 win in Belchatow.

It would not be an understatement to claim VfB disappointed during their 2014 DenizBank Champions League encounters. I gave credit to Stelian Moculescu earlier this season for the group of players he has brought together, but I was eager to find out if he will make a good team out of them. They might lead the Bundesliga table as of now and are still in contention for the German Cup, but I would rather answer no to the previous inquiry. Friedrichshafen looked good in Unterhaching on Sunday and gave us signs that they might regain the championship after a two-year recession, but playoffs will show if these indications are not elusive. They started the 2013-2014 campaign slowly and, in my opinion, were among the big losers in Europe. Two wins against Galatasaray is not enough for a team with such ambitions and roster. Moculescu’s boys could not even gather the necessary amount of points to make it among the best runner-ups, so they will continue their international journey in the CEV Cup where Skra Belchatow poses a serious thread.

I will finish my Bundesliga impressions with some good words about the underdogs from Buhl. I expected them before the beginning of the season to slowly appear at the very top layer of the domestic league ranking and they are indeed there. What is more, they took part in one of the most memorable CEV Cup games ever. Having lost 2-3 the first game at home against the Italian favourites Bre Banca Lannutti Cuneo, the Germans took revenge and made it to a Golden Set after another five-set heart-breaker. The last point of the Golden Set in Cuneo has circulated the social networks and showed how well Ruben Wolochin works with these chaps. Hence, in addition to VfB Friedrichshafen, TV Ingersoll Buhl is the only German team still in Europe. Wolochin’s underdogs will meet Paris Volley in the Challenge Round.

*11 teams started the 2013-2014 season, but the participation of RWE Volleys Bottrop has been suspended with immediate effect by the German Volleyball League (DVL) due to failure to meet requirements of the economic licensing process. All their games have been annulled.