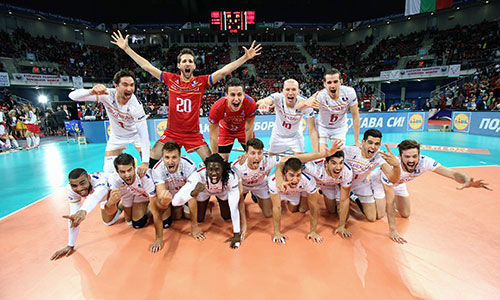 Already famous for their comeback, les bleus could not have caved in for the last act: unbelievable overthrow in the second set, undefeated Grebennikov, amazing Rouzier exquisitely served by Toniutti, one showman on the court: Earvin Ngapeth and one an inspired Laurent Tillie. Voilà, this is the secret of an incredible season! Team Yavbou definitely wrote history tonight, as this is the first time they manage to claim an European title after numerous attempts. Nonetheless, this amazing season concluded with a well deserved European title might become the stepping stone for the French volleyball.

The score speaks for itself: a straight sets victory, a little bit of drama in the second and third act, but French players never showed weakness. On the other side, the younger players of Andrea Giani seemed to be overwhelmed by the setback suffered in the second set. Eventually, everything finished in the third act, when France’s one showman, Earvin Ngapeth, managed to uniquely capitalize the fifth match ball, hitting a branded ball, almost turning his back to the net.