Aleksandar Atanasijevic: This is the volleyball 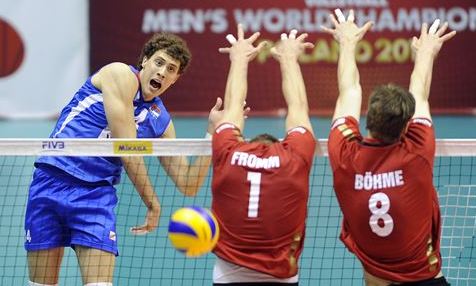 I should play better, be the leader of the team, and I wasn’t – critically, after losing the final against Copra, said Aleksandar Atanasijević. The opposite of Sir Safety Perugia also spoke about the club’s chances in the playoffs and how he feels in Italy.

You lost against Copra Piacenza 0:3, but you were trying to fight. However, I guess you expected something more?

Aleksandar Atanasijević: – Sure, but we aren’t a team of stars. We create a team that must be focused all the time, which must fight for their and play at 100% of their abilities. This time, though, we didn’t play the best competition, but we’ve proved that we can fight against such strong teams as Copra Piacenza. It is a pity that we didn’t win that this game. However, I hope that in the play-offs we will show up better and that we will be one of the teams that will compete for the Italian championship.

What’s happened with you? It was a matter of being tired – against Lube you played tie-break.

– That’s right, Saturday’s game was for us a very difficult and exhausting, but it cann’t be an excuse for us – I don’t want to look for this kind of excuses. If you ask me, I should play better, I should be the leader of the team and, unfortunately, I wasn’t. However, I hope that the next time will be different and we will prove what we can do and afford more.

You and Vettori are young players – can we tell that this game was also an indirect rivalry between the two of you?

– (Laughs) I don’t look at this in that way, I don’t pay attention on this type of rivalry, on who is the better player. I respect everyone equally. Really, I never thought about that as a confrontation between me and Vetto (Luca Vettori – ed.). Indeed, we can said that the day before the same rivalry was between me and Zaytsev… This time Luca played better, maybe in the next game the roles will be reversed and I will play better than he? We’ll see. However, this is not about the competition with each other, it’s about what is the best for the team and that your team could win – this is the volleyball.

This is your first season in Italy. It seems that you feel here very good.

– Yes, it’s true. I feel fantastic here. Coach is a Serb and besides him there are a few other Serbian guys, what was very important for me. Perugia is my place. Also, the whole coaching staff is great and I am glad that I can play here. I also want to make it all could be seen in my attitude on the court.

Do you feel that you have improved your skills here?

– Of course! Italian League for me is the strongest league in the world. I think I improved in many parts of the game and to play here gives me a lot. But I don’t want to stop there – I want to continue to grow up, improve my skills and go up. I also hope that in the upcoming matches I will help my team win.

There are rumors that the next season you’ll play in Japan – is that true?

– (Laughs) It’s just a rumor that someone spreads. I didn’t sing anything yet – I have a valid contract in Italy. I respect my club and I think that now this is for me the best place, so why should I leave it? However, everything is possible and who knows what will happen at the end of the season? Maybe I’ll play in Japan, maybe in Russia, maybe I’ll stay in Italy? Nothing is clear – I am waiting for the offers from clubs and only then I make the right decision.