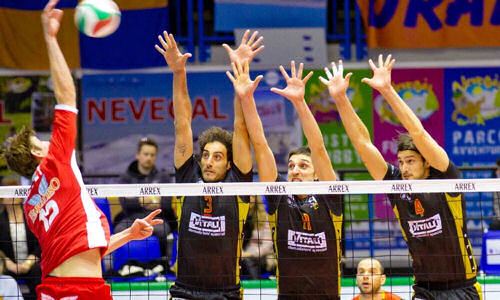 It’s really a fantastic feeling – said Alessandro Fei after victory in Italian Cup. – It’s not the end, we want to win someting more – he added.

It was a relatively easy victory and for sure it’s not something that everybody expected.

Alessandro Fei: – We played a really fantastic competition and our opponents, with no doubts, played pretty well. I think that the basic element that made ​​a difference in our favor was the service. We were putting pressure on the players from Perugia all the time and it allowed us to make blocks or defend the balls and have counterattacks easier. However, Sir Safety, undoubtedly, deserved to play in the final – the day before they had played very good against Lube, beating this team and making surprise. In the match against us for they failed.

How does it feel to win the Italian Cup for the fifth time in your career and for the first time with this team?

– (Laughs) That’s right, this isn’t my first triumph in the Italian Cup, previously I won this trophy with Sisley Treviso. With Copra I succeeded it for the first time. It’s really a fantastic feeling and emotions are so beautiful. The more that this is the first Italian Cup in the history of the team from Piacenza. I’m glad that I contribute to this success of the team. This is something incredible, unique. We give the joy to many of fans who came here to support us. We are glad that we could give them this pleasure. It’s a beautiful thing!

You also may be satisfied with your game – you have been chosen MVP of the match.

– I don’t want to assess my own game. The MVP award makes me very happy, but the whole team played very good and without my colleagues, wouldn’t receive it. I would like to thank all the other players because they helped me to win the title of best player of the match. This award also their award because as I said – the whole team played really good. I to thank also all those peaople who have chosen me.

To the beggining of the playoffs there are only two matches. You still have a chance to take first place. Will you be able to do this?

– We’d love to be promoted from the second to the first place. Lube Macerata can be beaten, even this weekend Sir Safety Perugia proved it, and we also proved this, eliminating them from the Champions League. Nothing is certain and we really we would like to start the playoffs from the first place. Well, all will be clear soon.

Victory in the Italian Cup means that Copra, at least in Serie A, is coming back on the top?

– Without a doubt we create a big and strong team and we are trying to prove it on the court whenever it’s possible. Winning the Italian Cup is just the first step but we cann’t stop on this. We still have to work hard because I really would like to win something more. The playoffs will start soon we have only one goal – to win a scudetto. Copra haven’t won the national championship since 2008, so these competition is very important for all of us. We’ll give our best to improve the result from the last year (Copra Piacenza won the second place – ed.).