Jolanta Dolecka: This is just a theory 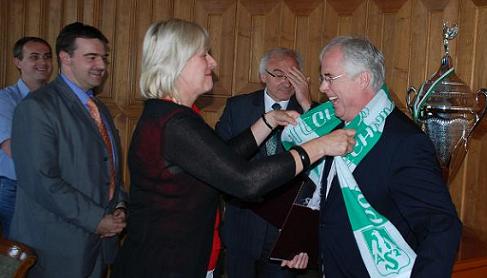 We have a nice team which certainly will show your brave character – said the president of AZS Politechnika Warszawska, Jolanta Dolecka.

In comparison with the previous season, when AZS Politechnika Warszawska was called the revelation of the season, this one can be considered as a disappointment?

Jolanta Dolecka: – I wouldn’t call this season a disappointment. Certainly there have been changes in the team which affected that this season we aren’t the revelation of the season (laughs). Actually, season after season, it is difficult to maintain the same team. I think that this team that we is doing good. If we go into the play-off round, we will be still in the game and I think the players can make even a surprise, of course, playing for places 5-8. Theoretically, we still have a chance to win the Polish championship but this is just a theory (laughs). The goal of our team was play in play-offs and I believe that we will succeed and then I decide that the job is done.

You haven’t managed to play good in Polish Cup – you lost against KPS Siedlce, which was a sensation.

– Maybe it was a disappointment but in the Polish Cup we played with the second six. Apparently our substitutes aren’t ready to cope with such task and KPS Siedlce is a pretty decent team and counts in the battle for promotion to PlusLiga. Well, I believe that the Polish Cup is neither our failure nor our success.

Speaking of cups, in the Challenge Cup the fate wasn’t kind to you – you played against Fenerbahçe Istanbul. Anyway, in the second match you managed to fight – this can be considered a valuable experience?

– The second game was much better than the first on on Torwar. In Turkey our team quite bravely fought and even players of Fenerbahçe were surprised because of that. But for us this is really too big challenge – in Istambul play stars, this club has a different budget or a coach – there works Daniel Castellani who knows how to lead a team. This is a team with a completely different goals than ours.

Challenge Cup is a pretty expensive game, though AZS played just one away game, so probably the costs weren’t so big.

– That’s right, it was only one game, so now it’s without meaning. On the other hand, I think that for some players those games were a good thing. They played against such celebrities as Miljkovic and Marshall and I think it won’t happen again soon. When we talk about the experience it was something positive.

When it comes to the financial situation of the club, it’s not colorful. Is this reflected in team’s the game?

– It isn’t colorful, but it isn’t also tragic. We have secured the money and I told the players that – perhaps belatedly – they will receive all the money. It’s impossible that the delay in payment was reflected in the team’s game. The players are professionals and they know they await their new contracts, perhaps new clubs, so everyone is playing for his future.

Have you already used to the fact that many players are treated AZS as “springboard” for their career?

– Partially yes, but it’s a shame that this is happening. But perhaps this will change soon and we can build a team in which at least two years will maintain the core, in which the basics won’t be changed every year. This is my dream.

AZS has always been famous with a good atmosphere – after the last defeats could be heard opinions that now it’s not pink. How does the situation look at the moment?

– I think that the atmosphere is positive, because we have a really nice team. These players make up the collective. And although sometimes the game doesn’t come out, which is perhaps due to the fact that one players is weaker in one element, the second in another and not always everything can be properly made up. Certainly also Szalpuk’s injury is a problem – now we have only three receivers. Artur is a good player in the attack and he copes worse in reception. Another player who hasn’t played for a long time is Mateusz Sacharewicz – he’s got a muscle injury. This caused that in the middle we can’t use all of our players. Mateusz has recently come back to trainings and I think that he has the papers to play in PlusLiga. Anyway, we have a great team with a good atmosphere which certainly will show its brave character.