Kevin Klinkenberg: Everything could happen in Berlin 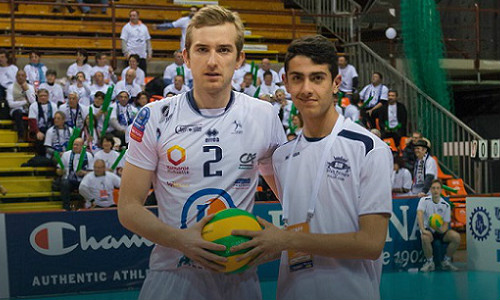 Kevin Klinkenberg, the new sign of Luczniczka Bydgoszcz will play with Belgium national team in Berlin at the begin of the New year. – This year I will have probably two or three days break for the Christmas holidays – Klinkenberg said.

–          You join Luczniczka Bydgoszcz during the season. What was your first impression of the club and the Polish league?

–          Kevin Klinkenberg: I’m happy that I came here. There was  a really warm welcoming by the club. The team has potential and I hope that we can keep high level in our games during all the season, and I will do everything I can to win a lot of games. PlusLiga is the strongest league I’ve ever played in, there are lots of great players from all over the world, professional organized clubs,, fans-  everything you need to play world class volleyball.

–          You showed really good skills in your first games in Poland. Why you were still available player in November?

–          Well, there ware some problems. I’ve signed  a contract in June, but the club decided to bring other player to my place, so I was waiting for other offers. There weren’t any interested clubs so I hoped  for some changes after European Championships. Unfortunately I didn’t play a lot in this tournament. After this I trained with Andreoli Latina in pre-season preparing. I would like to thank this club, because they allowed me to train on high level and keep in good shape. Right now I’m playing in PlusLiga and I’m happy that I can play in first squad in a strong league.

– Can you say something more about time you spent in Tours?

– I spent there two really good seasons, I played a lot of games, we won French league, cup and super cup… For me it was a great time, because this league was strong and I improved my skills. Now I’m more complete as player in comparison to two years ago.

– What about your plans for a Christmas break, are you going back to Belgium?

– Yes, but first my family visited me  in Bydgoszcz. I showed them the city I’m living in and they came to my last home league game for this year against ZAKSA Kedzierzyn-Kozle. I’m coming back for Christmas to Belgium for really short holidays. I will have probably two or three days break before we start preparing for the tournament in Berlin (an Olympic qualification).

– Do you have some duties over the Christmas or you’re only a guest in home?

–Well, I think both of that. I will help my mom in kitchen, but also I will find some time to put my legs on the table and just rest a little bit with my family.

– How about diet in Christmas time? Do you need to keep it or you can eat everything you want?

– I can eat almost everything I want, but because of the tournament in Berlin I can’t go full (laughs). I think I will give myself two days to try every dish and I will enjoy that because you always need to enjoy Christmas time.

-What will be the preparation for qualification tournament in Berlin?

– We begin on December 26th . We will play two games in France until 31st December… and on 1st January we have training….

-So I guess there is no chance to party all night in New Years Eve?

–No way! I think that we will organize  something small with guys from the team. After the trainings in France everything will be going really fast- we are going to Berlin and playing with the best teams from Europe.

-What do you think about the possible chances of your team in this tournament?

– It’s really hard to say. There is short time for preparation and you need to play the best volleyball you can from the very first whistle. You can go through the semi-finals because of one good match or one bad match by  your opponent.  Everything can happen in Berlin, it’s all up to your  form during the exact day.