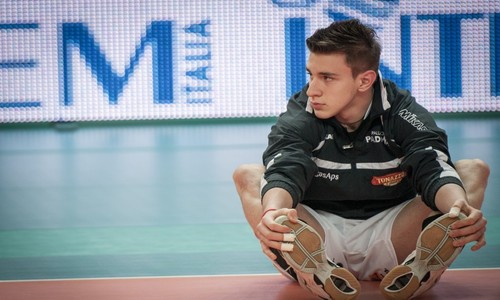 The youngest first-choice libero in the Italian SuperLega UnipolSai is also the first libero we have ever presented in our Talents series. Tonazzo Padova have hit the headlines several times already this season and Fabio Balaso was often the cause of it.

Historically the most recently introduced position in volleyball, the libero carries out most of a team’s reception and defensive assignments. Recognizing the potential importance of said position, coaches are even allowed to select two players to perform those duties. The 20-year-old Balaso, however, is the only libero Padova’s head coach Valerio Baldovin has been using and the youngster is already attracting a lot of attention with his skills. He even won the MVP award once this campaign during Tonazzo Padova’s fifth-round encounter against the powerhouse Cucine Lube Banca Marche Civitanova at home. The visitors took all three points, winning 3-1, but Balaso was the best player on the field. And such an achievement shines even brighter when on the other side of the net stood the world’s best libero these days Jenia Grebennikov.

Balaso is apparently not among the tallest volleyball players, not even for the libero standards, but compensates with speed and superb defence. Time should help him further improve his reception and might perhaps bring him soon a position in a bigger club in the Italian championship. But even right now Fabio Balaso is enjoying his court time at Padova, a team stricken off by specialists and expected to fight for its place in the top tier, as they are on par with Gi Group Monza currently taking the last 8th playoff berth (at the time of writing this article).